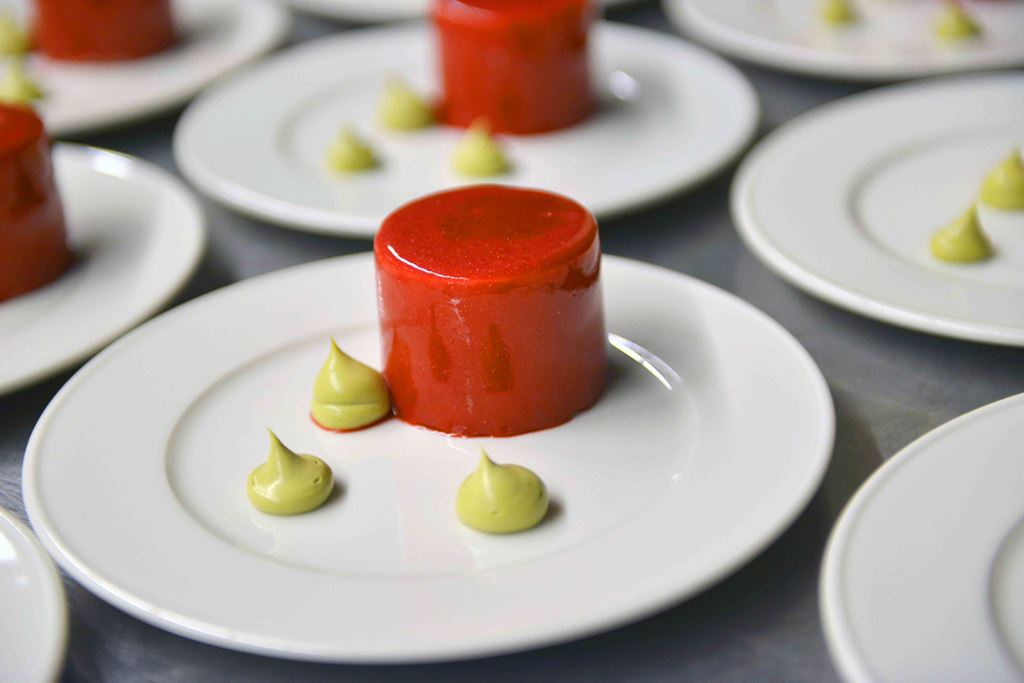 LEUVEN - The Great Belgian Beer Dinner is an annual event for lovers of gastronomy and beer pairing. Last year’s edition was staged the tavern at City Brewery Gruut in Ghent.

The composition of the dishes and pairings was well thought-out but unfortunately I had to pass on the last two courses or I would have missed my train. It turned out I was not the only one.

The 2015 edition took place in the Grand Hall of Leuven University, the former linen hall, just a stone’s throw away from Grote Markt and the City Hall, a pearl of flamboyant gothic architecture.

The list of participating chefs has grown from four to five and, for the first time, a patissier is taking part as well.

The cheese platter was selected by the internationally acclaimed cheese affineurs Michel and Frédéric Van Tricht based at the De Koninck brewery in Antwerp. 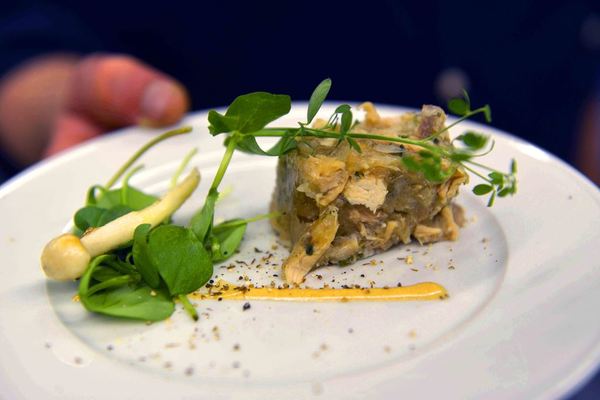 This year, in contrast to previous editions, all of the dishes will be served side-by-side in an open buffet. You have to follow the order of the menu but you won’t have to wait long before the next dish is ready to serve. One aspect has remained the same: the taste spectrum is explored to the full.

The ‘Harmony of home-made rillette of duck and smoked duck breast with a gel of Liefmans Fruitesse’ is paired with a Liefmans Goudenband.

The slightly sour touch provided by this Oudenaards bruin bier contrasts beautifully with the fatty meat and emphasises the sour aspect of the Fruitesse.

The ‘Razor of fennel, apple and parsley is calling out for an Oude Gueuze Megablend 2011 that was created thanks to the efforts of several geuzestekers.

A lovely pairing, as we often witness between fish, shellfish and crustaceans in combination with a gueuze.

Oven roast pork belly in a bouillon of West-Vlaams Oudbruin with nettles and carrots, covered in a herb crust accompanied by a mousseline made with Danko Power from the Struise Brouwers is done justice by the Embrasse made by Dochter van de Korenaar, a wood-matured, full-mouthed beer that veers between a dark abbey beer and a stout.

The ‘Geneugten van Ganda Ham’ (the pleasures of Ganda Ham) is accompanied by a darker St-Bernardus Abt 12 to reduce the saltiness of the ham. 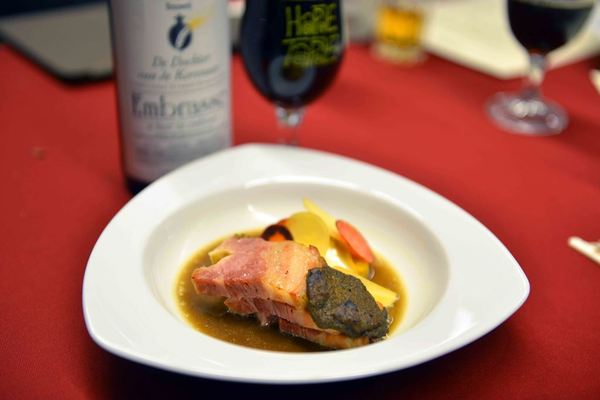 ‘Smoked eel, pomegranate, black radish with a jus of beetroot and hibiscus’ sounds promising. We are in for a dish of oily fish tempered by sharp and zesty flavours. In the face of this gastronomic assault, Girardin’s kriek more than stands its own.

The sourness of the kriek sharpens the appetite. At no point during the tasting of this menu did we feel sated. Every time we were keen, to sample the next round.

‘Hennepot’ prepared with SVEA IPA from the Struise Brouwers requires some explanation. ‘Hennepot’ is a preparation characteristic of the Poperinge region.

We are talking about veal, rabbit and chicken boiled in stock and vinegar, seasoned with white wine, lemon and herbs, all of it preserved in gelatin.

The well-hopped Zinnebir made by the Zennebrouwers from Brussels was selected to partner this characteristic dish from the hop-growing region.

We round off our meal with a ‘Cherry cool’ croquant, a crispy biscuit made with vanilla and almond, an olive oil cracker, a beetroot compote with granny smith, an infusion of krieken cherries and a whipped-up ganache made with chocolate from Opalys.

Now for the cheeses; the cheese platter, that includes a comté, demands a wood-matured dark Cuvée Zonderik. A great digestive beer to bring the evening to a close.

Afterwards, when mixing with the crowd, I overhear people saying ‘we should not agonise over beer’ and ‘let’s not analyse too much’. Also: ‘Let’s just enjoy it.’ Well, we certainly all did that. 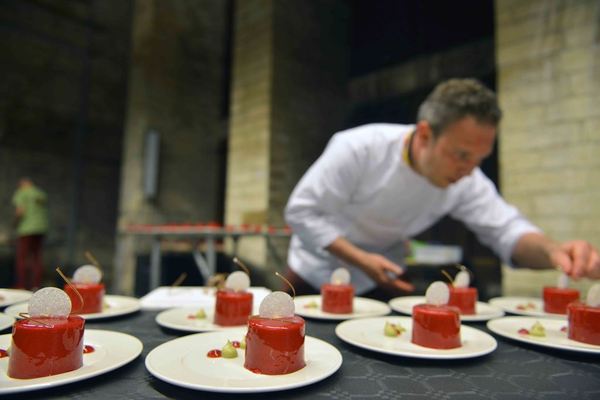