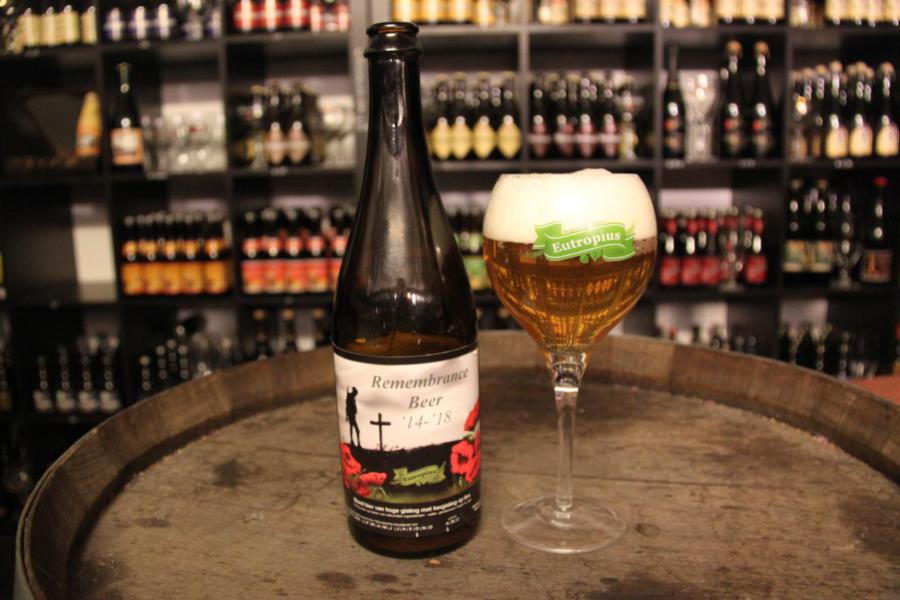 HEULE/KORTRIJK - Here at BeerTourism.com we have been so busy with the development and launch of our own site that we have not been tasting as many newly launched Belgian beers as we would like to; something we will rectify in the future..

However, we have made time to taste a new Remembrance Beer, recently launched by the Eutropius brewery from Heule in West Flanders. Our first taste of the brew took place at Beershop 't Koelschip, a speciality beer shop in Ostend, 'conveniently' located close to our office.

As we try to practice what we preach here at Beertourism.com, we decided some time ago that our New Years Eve dinner would comprise of a fine selection of Belgian beers and cheeses.

We already assembled most of our list but we were still on the lookout for one or two more beers to complete the selection and thought to ourselves, why not taste this Belgian newcomer..

The beer itself is nicely packaged with a poppy on the label to symbolize Flanders Fields and the Great War and is currently only available in a 75 cl/25.36 fl oz bottle.

The first batch was released as a limited edition and is selling out fast. Even the Belgian military has taken an interest in the beer and would like to use it as a gift; in fact a first shipment has already been sent around the globe to Australia.

The Remembrance Beer '14 - '18 is a nice straw/hazy yellow coloured blonde containing a solid 9% ABV. Strong carbonation, very yeasty and medium to full bodied. It has a very floral, fruity aroma and some bitterness in the aftertaste due to the hops. That means it’s better to enjoy this beer with a fish dish rather than to cook with it. A very likeable beer brewed to commemorate one of the most important periods in recent history.

The Eutropius brewery can be visited on set dates and with the attention their new brew is getting, expectations are that a second batch will be released soon. The activities around the First World War Centenary will span 4 years, from 2014 to 2018.

Needless to say, we have added this Remembrance beer to our New Years Eve menu.