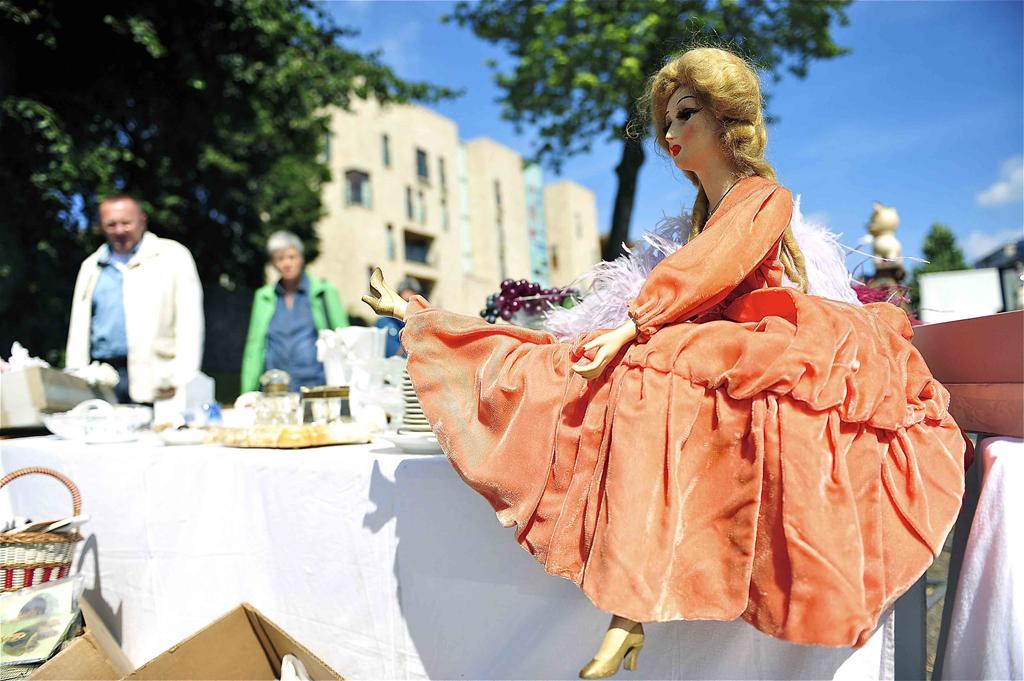 TONGEREN - This is one of the oldest cities in Belgium, with a history stretching back to the Romans. This short guide will introduce you to the must-sees of this fascinating city. As you approach Tongeren – from any direction - you will see the tower of the Basilica. It has always been a beacon.

The current church was built on the location of an older Romanesque cloister church, which lives on in the handsome surviving courtyard that used to give access to the church, the dining room, the chapter house and the dormitory. The basilica you can see now is the result of hundreds of years of building and alteration since it first went up in 1240.

The treasury contains a rich collection of relic holders and shrines, monstrances, robes, ivory work and fine metalwork. On the upper floor of the cloisters you can admire a unique collection of textiles.

The Grote Markt proudly displays a statue of Ambiorix on a plinth of natural stone, three metres high and built in the shape of a prehistoric dolmen. Ambiorix is dressed in a Celtic style with an axe in his right hand, a sword at his belt and with a winged helmet on his head displaying a dragon. Under his feet, the banners of his vanquished adversaries are laid out. 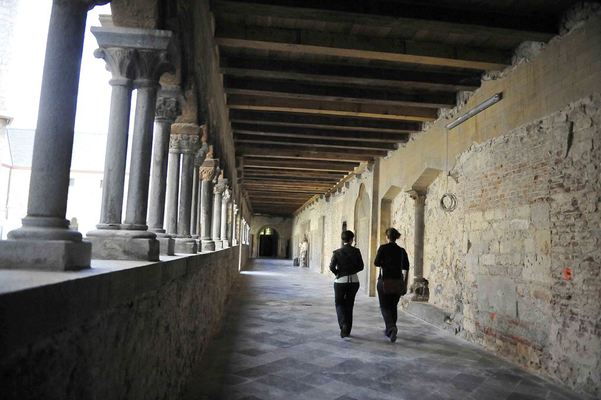 The Bravest of all Belgians

He is surrounded by a fence of spears, the heads of wild boar and arrows. But who was Ambiorix? He was the head of a Gallic tribe that defeated two Roman legions (around 8,000 soldiers) in 54 BC. Caesar then took his revenge and massacred these Gauls. However, Ambiorix managed to escape and his exploits are now the stuff of legend.

The town hall is another of the attractions of the 'Grote Markt'. It stood at the corner of the main Market square and St Truidersstraat until the Great Fire of 1677.

In the early 18th century the current building was put up on the location of the destroyed linen exchange. It was designed by architect Pascal Barbier, who was also behind Liège town hall. Tongeren Town Hall is a feat of classical architecture and fits perfectly in a city with Roman roots. The three-sided pediment embedded in the façade shows the Prince-Bishop’s coat of arms, the sword and staff symbolising his religious and secular powers.

The interior of the feasting hall (1815) on the second floor is Louis XV. The entire building is a great example of how the 'Maaslanders' used to build in the 18th century. 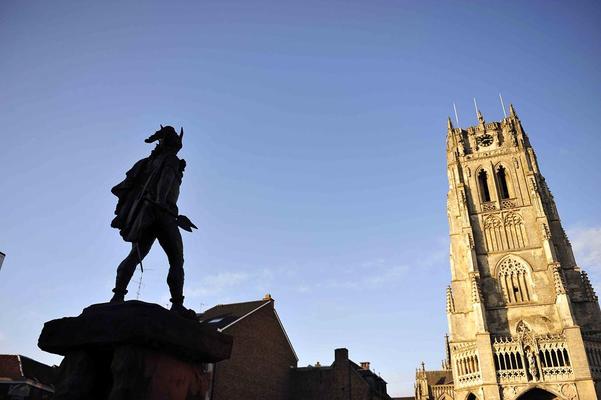 Think of Tongeren and the Gallo-Roman Museum springs to mind first which will take you on a huge journey through time. The first great move forward is 500,000 years ago when the first human inhabitants moved into the region. Around 5300 BC the first farmers settled here, marking the evolution from a hunter-gatherer society to an agricultural one.

In 825 BC is the next landmark, marking the end for a type of society where everyone is more or less equal as an elite is born.

And, finally, in 10BC we see the Roman settlement, then named Atuatuca Tungrorum, and the first town in the region, in which a local variety of Roman culture was formed.

The large scale model on the top floor gives an impression of the town in 150 AD, the height of the Roman Empire. Ten per cent of what you can see here was found in Tongeren itself, including a town dwelling, a temple and the baths or thermae.

Only a small fragment now remains of the great Roman temple, once 130m x 55m on a podium that was 2.75m high. Work is in progress to open up the temple site to the public but in the meantime, you can view the scale model in the Gallo-Roman museum. 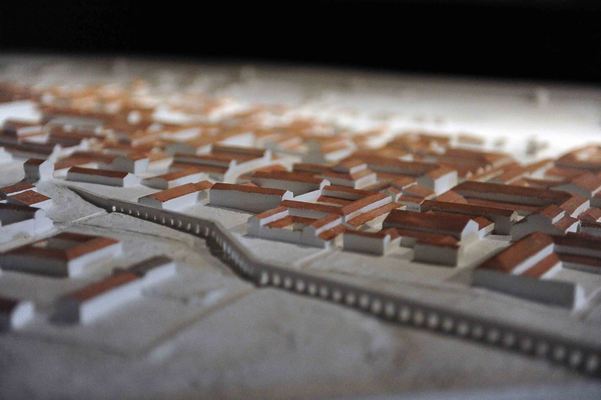 The Moerenpoort (dating from 1379) takes you to the 'Begijnhof' courtyard (Beguinage), the last remaining city gate in Tongeren. ‘Moeren’ is a reference to the marshlands of the river Jeker. The city gate itself was constructed between 1257 and 1264 on the remaining foundations of the Roman walls, dating from the second century AD.

In the middle ages, the Tongeren area was ruled over by various lords; the town and a number of its villages belonged to the Prince-Bishopry of Liège. Tongeren enjoyed certain privileges which allowed it to maintain a town militia and its city walls were symbolic of its autonomy and privilege.

The 13th century Begijnhof is, like the Basilica, a Unesco World Heritage site. Its history harks back to the middle ages. The year 1322 saw the building of 150 begijnenhuizen meant to house women and built of wood and clay.

Only public buildings such as the Poorthuis (gate house), the Infirmerie (hospital) and the Brouwershuis (Brewers' House not to be confused with the one in Brussels) were constructed in stone. At the end of the 13th century the Sint-Catharinakerk was built, with three supports, following the basic design of the Roman basilica. Here you will find statues, paintings, furniture, textiles and a beautiful mural from 1521.

There is also a remarkable painting of Erasmus, the great Renaissance thinker, pierced in many places by supplicants seeking its healing powers. The church is now used for exhibitions, concerts and lectures. 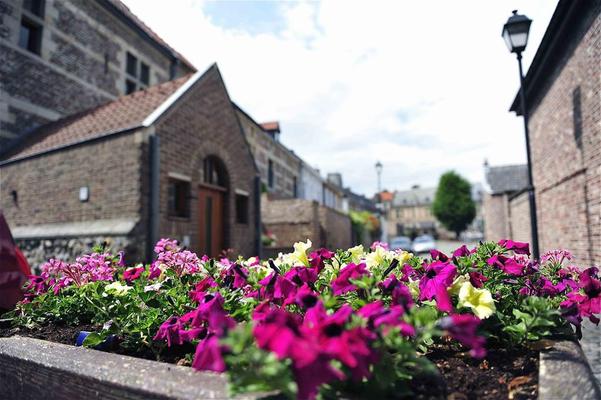 Who exactly were the begijnen who lived in those humble dwellings? They were pious women who opted for an independent life, away from the nunnery and outside of marriage. The exception rather than the rule in those days. They swore a temporary oath of obedience and chastity to the begijnhof mistress.

If they changed their minds, they could still get married or join a nunnery, but would have to leave the begijnhof.

The adjacent Ursula chapel is now multi-functional, in a beautiful environment, both indoors and outside on one of the most stunning terraces in Limburg, you can enjoy a drink, a snack or a full meal. On the edge of the begijnhof you will find the lovely former Agnetenklooster (15th century), restored using original materials.

The various building styles you’ll see are a testament to its rich history. This former nunnery now houses the department for youth services and the outside areas and the chapel were turned into an urban park that is also used as a short-cut by pedestrians. 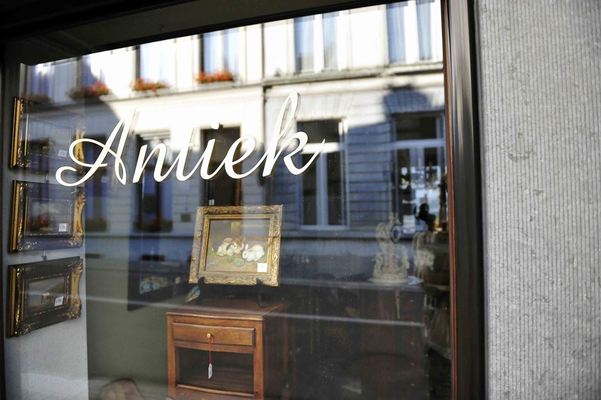 Sunday mornings see throngs of visitors descending on the antiques market. You will hear a mixture of American, French, Danish, German and local Tongers accents in this melting pot. Antiques dealer Karin Maenhout says: “This started off 30 years ago as a flea market.” Most of the dealers here still do not specialise in any particular era. I get lost amongst the chairs, tables, light fittings, candelabras and mirrors.

Just like her colleagues, Karin does most of her selling on a Sunday morning. During the week she trawls markets and shops across Belgium and France. “All the way down to Montpellier in the South of France!”

Does she find it easy to say goodbye to the beautiful objects she sells? “I used to find it quite hard in the beginning,” she replies. “But now this is completely my profession. However, I can only sell items that I would have in my own home.

How can you put your heart and soul into selling something that you do not like yourself?” Karin loves her small town, big on ambiance and beautifully restored. “It really is one big village!” she exclaims. Karin has been doing this for more than 13 years, turning her hobby into her profession. Karin: “I had my training in Liège, including history of art, and I have learnt how to estimate the value of antiques. After all, you want to know what you are selling, don’t you?” 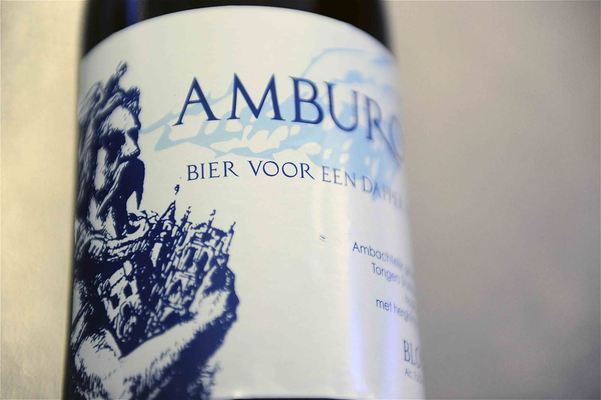 A Splash of Beer

City beer Amburon is found in around 15 cafés and restaurants in Tongeren. The name is a reference to the legendary Ambiorix, Chief of the Eburones tribe. Amburon is brewed for the city of Tongeren by the Anders brewery in Halen. Brewer Bart Durlet says: “We are also re-introducing the tradition of morellen beer for the annual fair in September.

For a limited time we will brew and pour a kriekenbeer based on pils.” Bart earned his spurs as a brewer with Ter Dolen, Alken-Maes, the Lochristi tasting brewery… In his own brewery, he brews on behalf of others and experiment with new tastes.

“Each year in August we organise beer festival Anders here in Tongeren,” Bart tells us. “We prefer to invite small and unknown breweries to take part.”