Why breweries have taken a shine to Decoprint - and we have too! 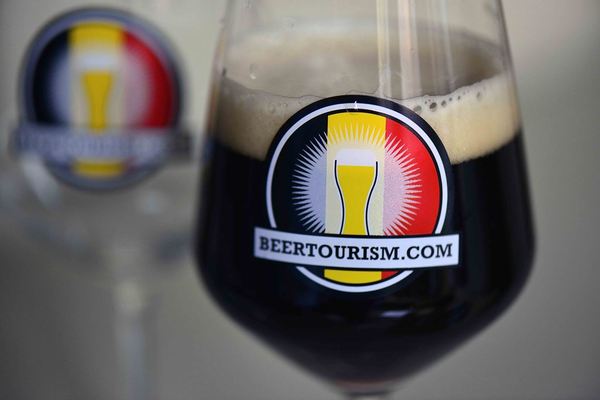 HOOGSTRATEN - Belgian beers are known as much for their astonishing variety of glasses and bottles as they are for their diversity of types and flavours. After all, each beer supped is sensory journey, from bottle to glass to palate. You can't separate the beer-tasting experience from the vessels that the 'belgic ambrosia' passes through.

But have you ever wondered who manufactured (or printed) the bottle you're pouring from – or the glass from which you sup and sip? More often than not, the answer is Antwerp glass-printing stalwart, Decoprint.

This Meer-based company rolls 50 million bottles, and 30 million glasses, off of the conveyor belt at its premises, just north of Antwerp, every year.

Achouffe, De Koninck, Heineken, Sourcy, Grolsh, Cécémel, Jack Daniels Worldwide and Kikkoman – familiar names in beverages and spirits, both large and small, all of whom have turned to Decoprint to bring something special to their custom glassware.

Naturally enough, among their biggest customers are the Belgian breweries, especially for their 75cl bottles, or for specialist beer-tasting glasses with a difference. Some have even gone quite 'high-art' about it all. Duvel-Moortgat, for example, uses Decoprint for its artist-designed collector's Duvel glasses. And their latest customer? None other than your very own BeerTourism.com.

After all, if every brewery in the land can have a glass for each of its beverages, why not the poor beer-hacks 'cursed' with the tasting of one and all. But more on that (and how you can get your hands on one) later. 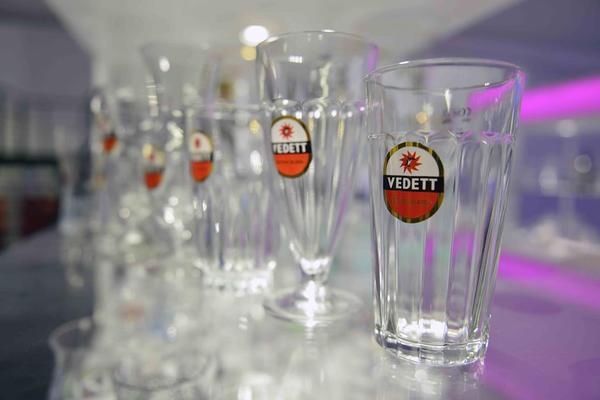 Because we're Decoprint's newest customers (and because we're just a little bit nosy) we got to take a insider's look at the whole process of getting a glass from cool concept to cafe counter. So here's what we found out.

In the Decoprint showroom, you'll find a veritable army of standard glasses on display, joined by a motley host of exclusive designs of all shapes, sizes and colours: stemmed, beaker-shaped, pressed or blown, own-designs and adaptations of existing ones.

But how exactly does one of those glasses take shape? Well, the main thing they stress here is their close co-operation with the client, right from start to the finish of each glass-in-the-making.

Decoprint is really a one-stop shop for managing the whole production process, worked out in tandem with their customers.

Together, brewery and Decoprint will select the glass manufacturer best-suited to making the glass in mind – taking into account the shape and size desired, the image that the glass should project, the numbers required, and so on.

That's because, these days most of Decoprint’s shopfloor business is focussed on the printing of standard-size glasses. The actual glass manufacture (and some of the printing) is outsourced to a variety of companies specialising in the art of glass. 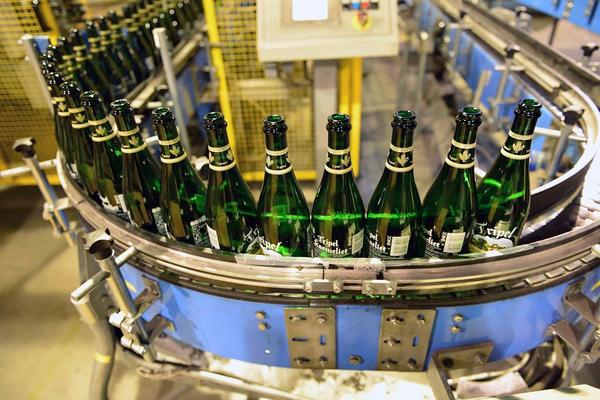 With the manufacturer selected, a number of glass design proposals are sketched out on paper for the brewery. Then, once the design is agreed, a ‘real life’ prototype is made from plexi glass. Only when the client is happy with every aspect will the glass be taken into production.

In the meantime, Decoprint will develop its printing proofs on a generic glass, to see how the colours and decoration will play out. If a particular colour isn't available in ceramic ink, it is mixed especially. Then, once the selected glasses have been delivered by the glass manufacturer, samples are created again – but now printed on the glass for real.

This is where Decoprint can bring its real expertise to bear: an eight-colour fully-automated printing production line.

Using this sophisticated system, a glass can be printed with the logo literally ‘baked’ into the glass (at 525°C) – so that it truly becomes part of the drinking vessel.

Once the prototypes are printed, they are passed to the brewery, so it can give the line its all-important approval. The final burning process itself only takes two to three hours. So it's clear that Decoprint spends a pretty significant chunk of its time on all that thorough preparation. 98% preparation, 2% perspiration, as they say. 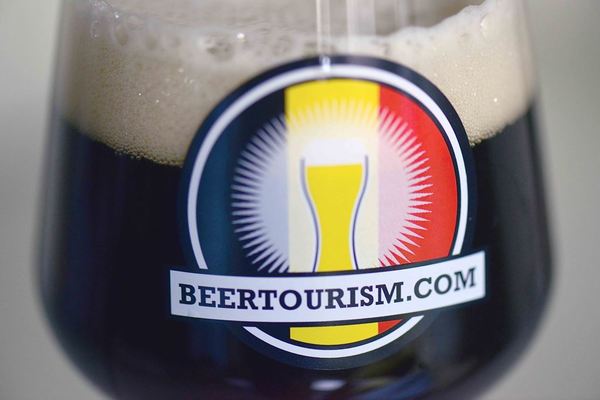 So how is the printing on glasses or bottles actually done? Decoprint makes use of ceramic inks, composed of a fine mixture of ground-glass and pigments. These ‘dry’ inks are heated until they're liquid and then poured into a sieve, by colour (each machine has eight stations, and so also eight sieves).

The automated sieve will then spread the ink across the glass. The glass or bottle enters the oven at temperatures between 550°C and 630°C. At these high temperatures, the pores of the glass open up, ensuring the ink absorbs into the glass. That way the imprint shouldn't rub off.

That's not always the experience of the beer-cafe drinker, of course. But if the ink on a glass does wear out, it's usually down to the use of a lower-quality ink, or because of the need to use a lower temperature. 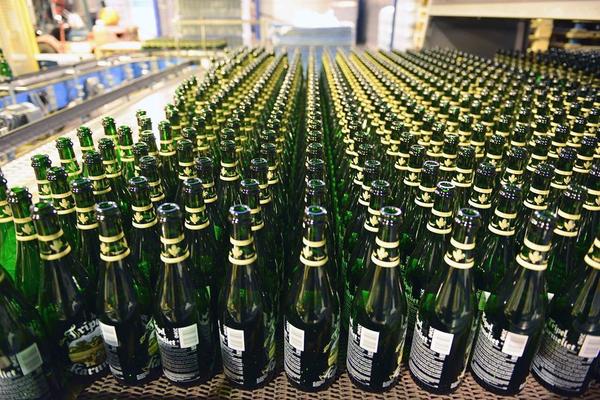 Story behind the sea of bottles

Decoprint’s long-standing customers include many breweries who choose to have their bottles printed here, too. In fact it was a local brewery that changed Decoprint's fortunes for the better, some two decades ago. In 1996, the company won the contract to print the pixies that shine so proudly on the Brasserie d’Achouffe bottles. These were then destined for export to America.

That was something of a breakthrough order. The high-quality imprint stood out from the many labelled, and often damaged, Belgian beer bottles then arriving in the USA.

Brasserie d’Achouffe took off state-side, and soon buyers from other Belgian breweries were beating a path to the Decoprint factory. 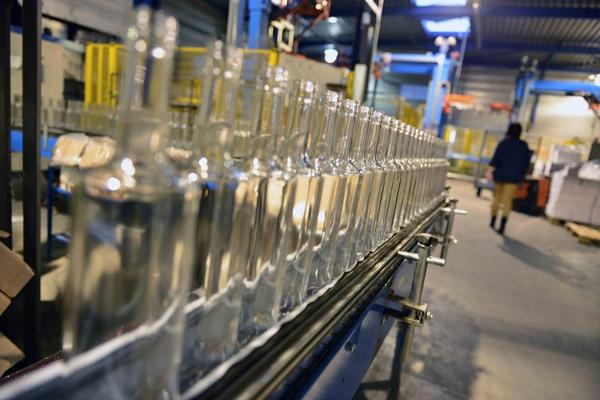 Eight is better than six

A strong increase in demand followed, and as a result, in 2002, a fully automated eight-colour bottle printing machine was installed. Decoprint is now able to offer two more colours compared to its competitors. A second, and then a third, fully-automated bottle line were installed, representing a significant progress in the automation of such technologies.

But how does that technology work its magic? Well, you start with a pallet of blank bottles, and simply place them on the start of the production line.

The machine then takes charge of the entire process. It places the new bottles into position, prints on them, and puts them onto the conveyor belt.

That takes them into the oven, coats them, gathers the printed bottles onto pallets, and then finally seals the entire unit. This automation frees up much more time for quality control.

It also allows bottling customers to have a huge number of options, from a technical point of view. Bottles can be coated in all possible colours and then printed or partly covered with a sleeve. 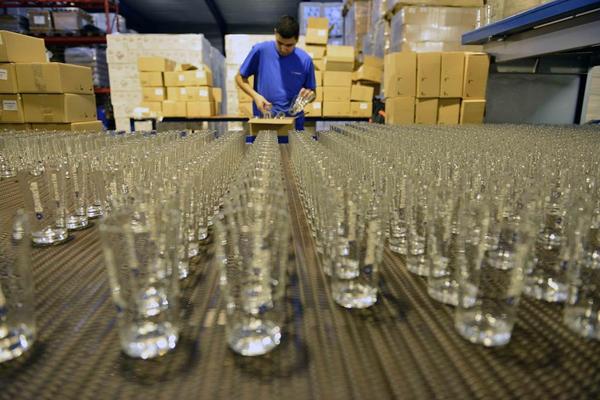 From the garage to the factory

But to truly appreciate what Decoprint have acheived here, you need to take a step or two back in time. Decoprint has come such a long way, that it's hard to imagine that beginning, seeing the company and its shiny modern premises today.

Twenty years ago, founder Patrick Christiaansen and his wife Martine Koyen were sticking decals onto the drinking glasses by hand in their garage. These transfers were then melted into the glass.

The acquisition of a one-colour printing machine was a great step forward, as it allowed the logo to be printed directly onto the glass. Decoprint soon moved to a new location in the Transportzone Meer business park, and started to use a six-colour printer. 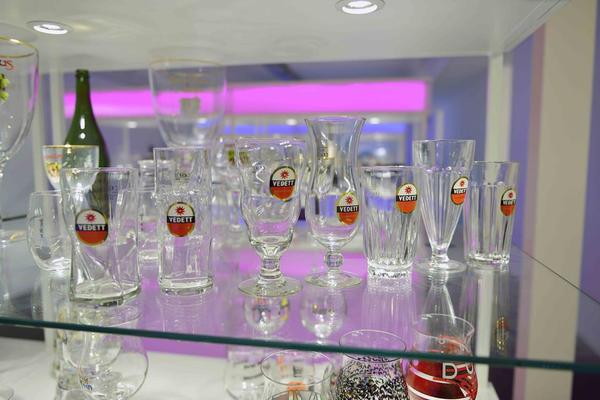 Now, of course, Decoprint is capable of printing on glass in a completely automated way, using its eight-colour line. And naturally enough, it decided it was going to make that printing line its main focus.

So from 2000 onwards, those transfers that needed to be applied by hand have been done by its GPC subsidiary, in Romania.

Once a week a lorry departs for Romania, loaded with unprinted glasses. It returns full of glasses with baked-in decals. Romania also focuses on ‘specials’ that are not suited to machine processing. So they deal with hand transfers to non-standard glasses.

That could simply be those of smaller or larger sizes. But they also handle the special decorations needed for oddities like square glasses or bottles, or where the client has decided they really need a logo on the bottom of the glass.

Decoprint has also forged links higher up in the glassware industry feeding chain, with a strong relationship with Hogerhuis & Smit BV (H&S).

This company is an important supplier of point-of-sale materials for brand manufacturers. They are also a big importer of glassware, pottery, porcelain, stainless steel shakers, hip flasks and clothing. Decoprint NV has been in partnership with H&S since 2001: a win-win deal for both companies.

With logo application done entirely in-house by Decoprint, H&S has room to provide even more added value. Equally, H&S has special relationships with many manufacturers. That helps Decoprint to offer very competitive prices across scales, from small (just one pallet) to the largest of volumes.

Which brings us to our very own classy (and exclusive) BeerTourism.com glass. We like to think Decoprint have designed an exquisite drinking vessel for us, one made with beer-tasting uppermost in mind. The glass can hold a total volume of 51cl.

On the outside you'll find markers for different measures: 12.5cl, 25cl and 33cl. That makes the BeerTourism glass the perfect measure for the tasting of all beers – whatever the bottle size, and whether creamy-headed, or froth-light.

It also makes it greatly suited for use in restaurants, where the beers are many, and the glass storage spaces few. We reckon its elegant design will be well-received by both sexes (well we did ask at least one representative member of each from the BeerTourism staff).

There's even a pearlisation point at the bottom of the glass to provide a beautiful display of pearls, if you like that sort of thing (and we most definitely do).

The glass is currently distributed exclusively by Horeca Totaal, but can also be purchased from the BeerTourism Café Manuscript, in Ostend. From early 2014 we're hoping the glasses will be available throughout Belgium. But if you can't wait that long, please do get in touch with jim@beertourism.com for further information. 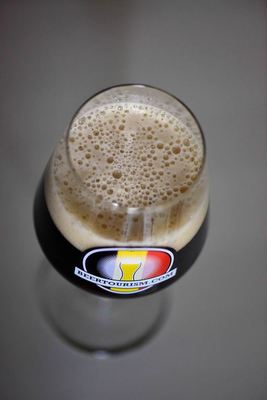