'Belgische Brouwers'/'Brasseurs Belges' - or 'Belgian Brewers' in English - is the new name of the national Belgian Brewing Federation. The name shouldn’t be taken to refer to Belgian brewers in general, as not every brewery is a member. However, we are talking about one of the oldest trade associations in the country and even in the world, with roots that go back to the powerful medieval brewers’ guild that was established in the 14th century.

And thus, it is no coincidence that the Brewers have their seat in a historic location, the Brewers’ House, building (established 1698) located in the Grand Marché/Grote Markt in Brussels.

Nowadays, the Federation represents well over 100 large and medium-sized breweries who account for more than 90% of Belgian beer production. Its membership consists of active breweries only and most of these produce their own beers under their own names.

Statistics show that Belgian beer production in 2012 reached 1,857,100,000 litres, not far from the high that was achieved in 2011. In the meantime, exports are on the up. 2012 saw 60% of beer production go abroad, representing a 5.4% rise compared to the previous year. In 2013 the overall figures went down slightly but over a 10-year period, exports have increased by over 70%.

Who, now, are the biggest consumers of Belgian beer? There are our neighbours in France, Germany and the Netherlands, but there are also the USA, Italy, the United Kingdom, Canada and Japan. 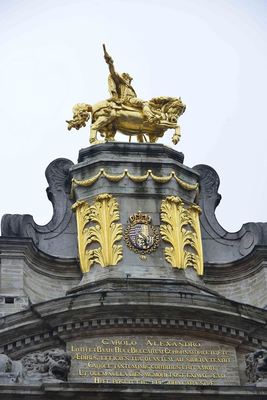 Now it’s time to dip into the rich history of the Federation of Belgian Brewers and that of the the Brewers’ House. The 14th century saw the first appearance of stone-built houses at the 'Grote Markt'/'Grand Marché' in Brussels, in the vicinity of the splendid Town Hall, built in a Gothic style. The 'De Hille Mansion', later known as 'Den Gulden Boom', was located on the current site of the 'Brouwershuis' or 'Maison des Brasseurs'.

Towards the end of the 16th century, the brewers’ guild purchased 'Den Gulden Boom'. However, in 1695 the troops of the French king Louis XIV demolished most of the 'Grand Marché'/'Grote Markt'. Luckily, the Town Hall escaped the violence and the brewers were undeterred.

They clubbed together to finance the restoration of their Brewers' House and engaged the architect Willem De Bruyn to restore it to its former splendour. He designed the building’s lovely façade with its baroque touches.

Around 1900, the Knight’s statue on top of the building was added. This knight is Charles, Duke of Lorraine, who, in his day, was an important beneficiary of the brewers’ guild. The cellars of the Brewers' House bear testimony to the rich Belgian brewing tradition. Tools, brewing kettles and yeast basins combine to give an overview of the development of this artisan craft throughout the centuries.

Here, the Belgian beer culture comes to life in vintage beer mugs, antique china and the objects you would find in many a Belgian inn.

The museum does not only pay homage to the past though; it also keeps up with the latest brewing technology.

Visitors will leave with an understanding of the raw materials used in brewing, the way a modern-day brewing hall operates and the working of processes such as filtering, fermentation, storage and bottling.

The Knights of the Brewers' Mash Staff 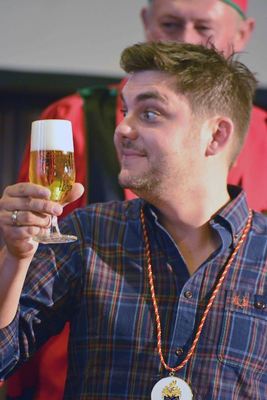 The Belgian Brewers are the heirs of the original 14th century Brewers’ Guild. The Knighthood of the Brewers' Mash Staff carries on this venerable, centuries-old tradition. The “knights” represent the dignity and honour of the brewing craft. Each year in February the Belgian Brewers celebrate the Feast of King Gambrinus, the legendary cultural icon of the brewing trade.

And the summer months culminate in the annual Brussels Beer Weekend held at the Grand Marché. Homage is paid to St. Arnold, the Patron Saint of brewers and new knights are appointed all the time - all “enthronements” completed with an elaborate ceremony in Brussels Town Hall.

Several brewers turn up in full historic regalia and, viewing the spectacle, it appears that time has stood still for a moment or two. So, who can be considered for this honour?

Anyone who has made an extraordinary contribution to the brewing trade or those who can fulfil the role of ambassador for the Belgian brewers and Belgian beer in general... Candidates will include exporters and distributors of Belgian beers, zythologues, chefs, sommeliers, beer authors and those from the media or academia.

The Belgian Brewers' always stand firm in the defence of Belgian beer culture and in 2016 a proposal backed by the three Belgian communities lead to official recognition by UNESCO. 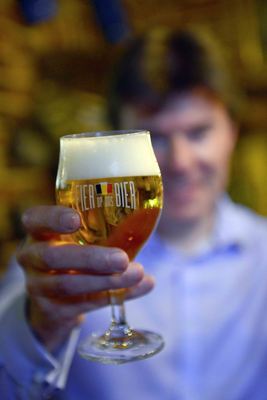 The Belgian Brewers also like to point out that the characteristic Belgian beer culture is woven into the fabric of our national identity and forms an essential part of our DNA, so to speak, as well as our lifestyle.

In the meantime, the Belgian Brewers work tirelessly to ensure that their countrymen take sufficient pride in their beer. This is why they recently launched a media campaign with the motto: “Fier op ons bier / Fiers de nos Bières” or “Proud of our beer”. The clips feature a chef from America and two pub owners, one from Paris and one from China.

And what do they have in common? Their love of Belgian beer. They use it in the kitchen, take great pleasure in serving it and promoting it to their customers. This poses the question: are the Belgians themselves really not proud of their beer? Oh yes, they are! However, we are spoilt, with over 150 breweries and over 1,000 different beers in a huge number of beer styles. But, like most brewers, we remain modest and down to earth. 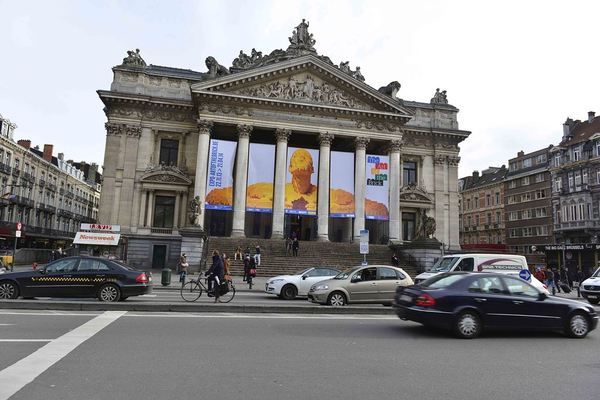 The Belgische Brouwers are rooted in a tradition that goes back many centuries. However, this does not prevent them from having an eye to the future. From 2018 onwards there will be a revolution in how they present themselves.

That’s when the brand spanking new beer experience centre, the Brussels Beer Palace, located in the former stock exchange building at only a stone’s throw from the 'Grand Marché', will open.

The Beer Palace is designed to be a very comprehensive representation of the Belgian beer world. It will not be a beer museum in the classic sense of the word. Rather, it will be an interactive experience centre where visitors can discover, at their own pace, all that goes into producing a good glass of Belgian beer. For example, you will be invited to compile your own taste profile on a journey through a labyrinth, and at the end of your journey will be able to taste a beer that matches it.

An extensive bar will await with an even wider range of Belgian beers, all of which can be bought in the shop and enjoyed at home. The Beer Palace will also provide a lot of handy beer-tourism information and stage workshops and demos. It’s a must for any beer lover. We’ll see you there in 2018.