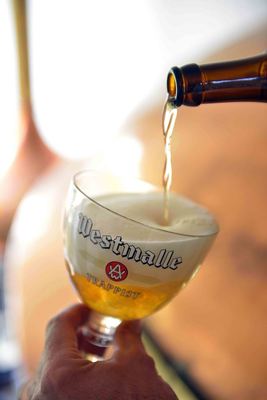 It is often said that when you have seen one brewery, you've seen them all. However, it is when you have visited several breweries that you start noticing the differences between them. And it is these details that make your next brewery trip twice as interesting.

For example, many abbeys are located in beautiful sites. And for a good reason; the monks always tried to settle in a peaceful oasis where they could pray and engage in quiet reflection.

When there is a brewery within the abbey walls, the quiet atmosphere must still be preserved. And thus, abbey breweries are often closed to the public.

If there is a visitor centre or café, as you find in Westvleteren, Westmalle, Chimay and Orval, it will be at a decent distance from the abbey walls.

At Orval you can visit the ruins of the medieval abbey whilst enjoying the views of the monumental ‘new’ abbey (built in the 1930s), giving the impression that you have leaped through 1,000 years of history.

Unfortunately the splendid historic brewing halls at Westmalle (built in the Art Deco style) and Rochefort are not open to the public. If, however, you want to steep yourself in a monastic atmosphere and visit an active brewery inside an abbey, we have several recommendations for you.

Make your way to the ruins of Abbaye d’Aulne in its idyllic location on the banks of the River Sambre just south of Charleroi, or to Val-Dieu in the green countryside of Herve near Liège. Another one for your list is the De Kluis abbey in Achel, where you can see the brewer at work through a glass wall. 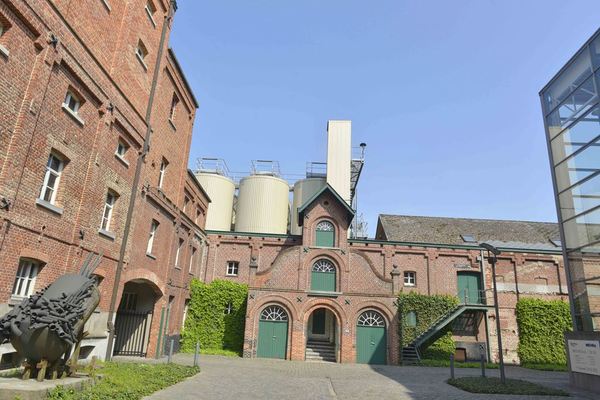 There used to be many breweries in every city or town. People used to travel less and their lives were lived within the small world of their own locality. Houses were smaller and not always comfortable, so the local café provided a great meeting place. Typically, a city brewery would supply a number of cafés in the local area.

Het Anker in Mechelen is a characteristic city brewery, located next to the historic beguinage. The same goes for De Koninck in Antwerp, which has undergone an extensive face lift and now offers visitors and unparalleled brewery visit experience.

You will find several artisan food stores, including a cheese dairy where you can see the cheese ripen, a butcher, a chocolate shop, an active coffee roaster and a restaurant.

Good taste predominates everywhere. Everything on sale is produced on site and you can see the artisans plying their trade.

Cantillon in Brussels is an authentic lambic brewery dating back to 1900. This living museum is a popular tourist attraction and is loved by aficionados of lambiek, oude gueuze, kriek and faro. Another brewery that has retained its character is Slaghmuylder in Ninove, where you can see a working steam engine.

De Halve Maan in the heart of Bruges is located in an historic spot, but also has modern production facilities. Visit the brewery museum and enjoy splendid views across the ancient city centre.

It is worth visiting Rodenbach in Roeselare to see the circular drying floor for malt, as well as the foeder halls where the Flemish red-brown beer matures in hundreds of gigantic wooden barrels.

La Binchoise is another city brewery, housed in a former malt factory and located in the shadow of the city walls of Binche.

Leuven is the cradle of the largest brewing company in the world, AB Inbev. You can still visit the splendid historic Stella-Artois brewhall. The hall is called De Hoorn and is located in a building that has been restored to its former splendour. Not all breweries are giants, scaling down is also an option.

Examples of this way of working include the modern city breweries of Gruut in Ghent and the Microbrasserie de la Principauté de Liège (Curtius) in the ancient heart of Liège, by the beguinage.

A Brewery in Every Village 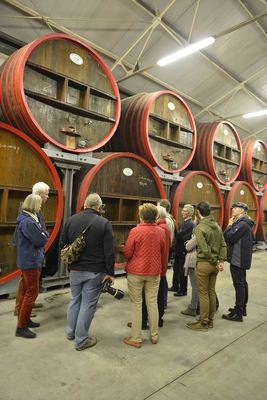 Many villages are proud of ‘their’ brewery and its beers. One of the oldest pils beers in Belgium, Cristal (first brewed in 1928), is still brewed in little Alken, though the brewery is now outgrowing its site.

At first sight, Martens in Bocholt appears to fit into its small-town surroundings. However, its façade conceals one of the largest pils breweries in the country. Its museum provides an overview of brewing technology throughout the years.

At Bosteels in Buggenhout (Dendermonde) the handsome brewer’s home emphasises the historic status of the brewer as a valued member of society. At Huyghe in Melle (Ghent) you will be surprised by the contrast between the old and the new.

Or make your way to the authentic village brewery of Cnudde in Eine (Oudenaarde) and admire a brewhall that dates back to the 1950s.

The Van den Bossche Brewery in the village square of Sint-Lievens-Esse, looks like it could be in a picture painted before the war. Dupont in Leuze, known for its saison, combines the old and the new.

The brewing kettle is heated by gas – using a direct flame – just like in the olden days. Brasserie à Vapeur in nearby Pipaix takes another step back in time. This brewer uses steam engines dating back to the 19th century.

De Brabandere in Bavikhove and Omer Vander Ghinste in Bellegem, two of the breweries of the Kortrijk region, have grown into modern producers.

Nevertheless they still honour the traditional brewing methods used to make Flemish red-brown beers, which are matured in wood barrels.

Many village and city breweries find themselves experiencing growing pains when they need to expand.

That is why the Van Honsebrouck brewery in Ingelmunster decided to build an entirely new brewery just two kilometres from its current site. In 2016 the brewery, known for its Kasteel beers, take ownership of its new ‘castle’. You can take this literally as the new building does look like a contemporary fortress.

The valley of the Zenne, to the west of Brussels, is replete with village breweries. This is geuze country, where the lambiek beers undergo their traditional wild or spontaneous fermentation, triggered by bacteria in the air that interacts with the beers while they are cooling in the open basin or koelschip.

At the Boon brewery in Halle, lambiek is brewed in the traditional way but with the use of modern equipment.

Timmermans in Dilbeek is the oldest lambiek brewery in existence and is very authentic. They have a brewery museum. Both Lindemans and Mort Subite are modern lambiek breweries.

Also worth a visit are the traditional gueuzestekerijen. These are not breweries, but blenders of lambiek beers where oude gueuze is made from the mixed brews.

Choose from De Cam in Gooik, De Troch in Ternat, Oud Beersel and 3 Fonteinen in Beersel.

At De Struise Brouwers in Oostvleteren they have taken a different approach.

They set up their brewery in the former village school. Their story is written in chalk on the blackboard and you can taste their beers whilst seated at an ancient school desk. 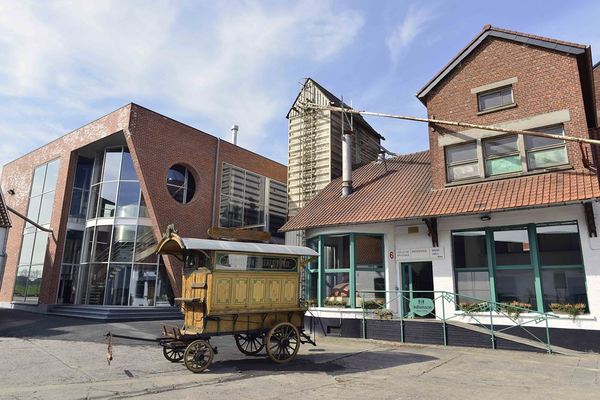 Brewing has a close link with farming. Traditional beers such as lambic and saison were often brewed during the winter to be consumed during the subsequent spring and summer.

Major breweries such as Palm Belgian Craft Brewers and Duvel Moortgat have their origins in agriculture. However, not many traces of this rural past can be found, although Palm does have its own hop field and stud farm for Brabant shire horses.

The roots of the Roman brewery in Oudenaarde go back to the 16th century. The brewery has never moved from its original site and has always been owned by a member of the Roman family, who also have a fine agricultural pedigree.

The Haacht Brewery in Boortmeerbeek used to be a dairy factory. The brewery site is very uniform and built on a large scale. Clearly, the builders had an eye to the future.

Dubuisson in Pipaix also started its life as a farm and the recent addition of the brewery’s own hop field once again establishes a link with agriculture.

This can also be observed at Brasserie des Légendes in Ellezelles, where the brewer cultivates his own barley, or at Jessenhofke in Hasselt where the brewer has outsourced the cultivation of organic barley to a local farmer.

Brasserie de Cazeau in Templeuve (Doornik) and Jandrain-Jandrenouille in the hamlet of the same name have both found homes in traditional square-shaped farmhouses.

Brasserie de Cazeau has a historic character barely touched by the passage of time.

In contrast, the modern microbrewery of Jandrain-Jandrenouille seems in danger of disappearing into the massive barn it calls home.

A textbook example of a farm brewery is Hof Ten Doormael in Tildonk (Leuven).

This brewery, known for its chicory beer and barrel-aged beers, lies in the middle of the fields. Here, the brewer farms as well growing his own barley and hops. Wilderen in Sint-Truiden used to be an entirely self-sufficient agricultural enterprise with its own distillery.

A spectacular renovation ensued, and now a brand new brewery and distillery stand side-to-side with the historic distillery.

The brewery tavern lives in a monumental timber-framed barn.

Ter Dolen in Houthalen used to be the summer residence of the monks of Sint-Truiden Abbey. Another brewery now housed in a barn, it oozes with the charms of life outdoors.

Another classic farm brewery can be found in the Ardennes, in Saint-Monon not far from Nassogne.

In addition to brewing beer, this farm safeguards the family tree of the Ardennes cart horse.

The country is never far away in Brasserie d’Achouffe (Houffalize) and the tiny Inter-Pol in the nearby village of Mont, both located in the heart of the Ardennes. Finally, Caracole in Anseremme (Dinant) relies on the local woodlands, heating their brewing kettles over wood fires. How do you start off a page about Belgian beer icons? First and foremost, by apologising to all t...
Read More
GET LATEST BEER NEWS