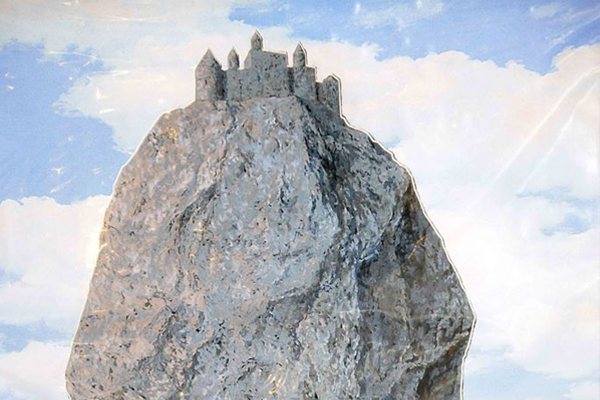 Belgian art lovers are quick to show their pride in the country’s rich painting tradition. It started in the Middle Ages with the Flemish Primitives who established the blueprint for those timeless religious scenes, which often contain portrayals of our cities amid their fantasy landscapes.

Pieter Breughel the Elder shows us how real people lived in his time. In doing so, the painter took up personal viewpoints with visions and personal pearls of wisdom. Some even view his work as an early predecessor of surrealism.

Belgium’s modern art was born with James Ensor in Ostend. His mask paintings fit perfectly into the surrealist style. Photography makes its first mark on the national art scene with his contemporary Henri Spilliaert.

Paul Delvaux will forever be known for his ethereal scenes featuring trains and railway stations and Rene Magritte holds a mirror up to us and asks, is this real or an illusion? Marcel Broodthaers worked Belgian symbols into absurd creations.

Nowadays, Luc Tuymans will amaze you with his cryptic clues about a past we still have to come to terms with. Jan Fabre, a jack-of-all-trades, blends theatre, performance art, painting, drawing and sculpture around all aspects of the human form.

Currently we are now seeing an evolution towards the three-dimensional. Panamarenko brings us an ode to the ultimate dream: being able to fly. Arne Quinze moves us to view our surroundings through different eyes. We have only really dipped our hand into the big Belgian art basket. Start your own journey of discovery. In every town and city in Belgium you will find art... 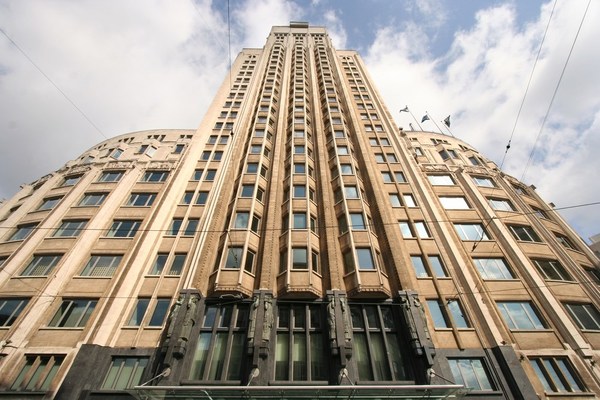 When we think of Belgian architecture, one name that springs to mind immediately is that of Victor Horta (1861-1947, the spiritual father of the Art Nouveau movement, whose work can be admired in Brussels in particular.

Another is Henry Van de Velde, rooted in Art Nouveau and Art Deco; one of his most striking buildings is the Boekentoren in Ghent).

With Horta you get perfect harmony of architecture and interior. He used industrial materials such as glass and steel, as well as wood and mosaics.

Technical innovations such as electricity and central heating were integrated in an ingenious way. With his style of building Horta aimed for a more human architecture.

He designed every single detail, from the layout to the stone used for the facade, from the towels down to the open fireplace and the forged ironwork.

He made his mark on a number of buildings in Brussels, including the Central Station and the fine art museum Bozar. The Art Deco movement, born in the 1920s, was a counter-reaction to the undulating, supple lines of the Art Nouveau.

Important Art Deco monuments include the Boerentoren in Antwerp, the Koekelberg basilica in Brussels, the Stoclet mansion also in Brussels, the Boekentoren and the Vooruit pharmacy in Ghent, Hotel Normandie in Koksijde and the Belfort tower at Charleroi town hall.

Highlights of modern architecture include: Louvain-la-Neuve, the youngest town in Belgium situated near Wavre, Liège railway station and the Antwerp High Court building with its undulating roof, the latter a design by Englishman Richard Rogers.

There are quite a few successful renovations, albeit often designed by well-known international architects such as Jean Nouvel, Zaha Hadid or Santiago Calatrava.

Antwerp Central Station springs to mind: a railway cathedral turned into a terminal for high speed trains. In the Bergen area, old mine sites were converted into a museum for contemporary art, Le Grand Hornu, and a science museum, PASS. 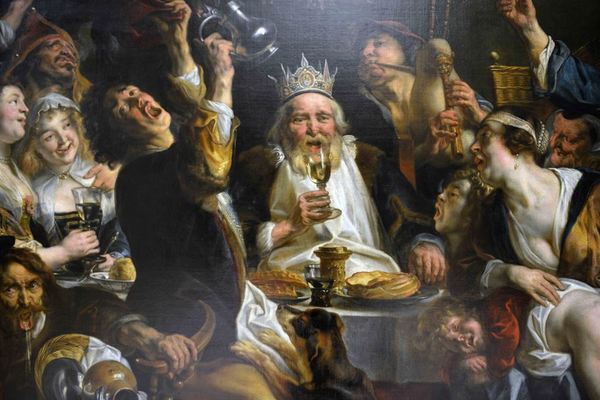 Belgium enjoys a rich and centuries-old painting tradition. The talents of the Flemish Primitives: Van Eyck, Van der Weyden and Memling shone through in the Middle Ages. Breughel painted a chronicle of Burgundian life with both its light and dark sides.

His elder brother Hubert painted in the more traditional style of The Lamb of God, which you can see in Sint-Baafs Cathedral, Ghent. Rogier Van der Weyden (1400-1464) expanded on the Van Eyck style.

His work can be seen in the new M museum in Leuven. Hans Memling (circa 1430 – 1494) was strongly influenced by Van der Weyden and you can discover him in the Sint-Janshospitaal - now the Memling Museum - in Bruges.

Pieter Breughel the Elder (1520-1569) was the most remarkable painter from the Charles Quint (Keizer Karel) era.

He painted jolly scenes from popular life but also produced harsh, realistic depictions of war. The people, landscapes and motifs he painted so convincingly have lost none of their power over the centuries.

Rubens remains the prototype of the universal humanist painter and his many admirers included Rembrandt.

His work can be seen in his former atelier, now a museum, the Rubenshuis in Antwerp, in Antwerp Cathedral and in the Museum of Fine Arts in the same city.

Antoon Van Dyck (1599-1641), who was called Anthony by English speakers, was one of Rubens’ most brilliant and accomplished pupils. He specialised in portraits and became a painter at the court of the English King Charles I.

Jacob Jordaens is another well-known artist from the same period, focussing on scenes of folksy exuberance. His figures are less finely drawn than those by Rubens, but his De Koning Drinkt (The King is Drinking) is a realistic and very expressive painting. 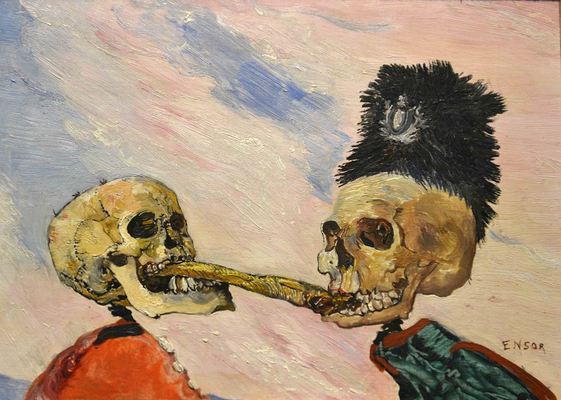 Contemporary Belgian artists show traces of surrealism and a tendency towards the absurd. Contemplate the masks by Ensor, Magritte’s pipe which is not a pipe, the imaginary railway stations by Delvaux…

Alechinsky opts for abstract shapes and Tuymans works in the figurative aspect, both to produce images that stay with you.

James Ensor (1860–1949) is generally regarded as the main innovator of modern Belgian art.

His art evolved towards the grotesque and imaginary with grinning masks, dancing skeletons and parodies of Christ.

His best known work is the monumental Christ’s Entry into Brussels, painted in 1889. Ensor’s talent for satire and mockery found an outlet in at least 100 etchings. He lived and worked in Ostend and his home city is keen to celebrate their famous son.

René Magritte (1898–1967) is the best known Belgian surrealist. Magritte emphasises the mysteries of the world of objects. Without a doubt, Magritte’s most famous work is La Trahison des Images with the painted wording ‘Ceci n'est pas une pipe’, below the very realistic depiction of a pipe.

His work is on display in the Magritte Museum in Brussels.

Paul Delvaux (1897–1994) was born in Antheit in the French speaking province of Liège and was another surrealist who became an icon of Belgian art, inhabiting his own poetic universe.

His work is mysterious and suggestive: female nudes with large dreamy eyes, human skeletons, old-fashioned trains and carriages, railway stations and buildings reminiscent of a classic style comprise the main images. Delvaux has a musuem dedicated to his work in Saint-Idesbald. 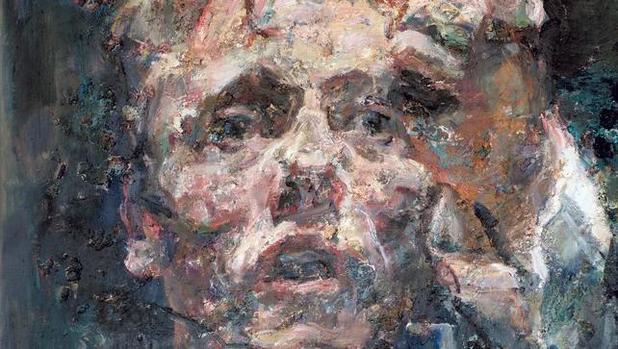 Pierre Alechinsky combines watercolours and sketches. His canvases were covered with masses of paint in shades of green, blue, white and grey. In the 1960s, the influence of Eastern calligraphy became apparent in his work and in 1965 he switched from oil-based paints to acrylic on paper. Later works include his well-known hand-drawn picture frames.

Michaël Borremans finds the inspiration for his paintings and drawings in old pictures of people and landscapes.

He shows the influences of Manet and Degas and, above all, Velázquez in works that have a tendency towards academism.

Luc Tuymans’ work is figurative. At a time when the art of painting has been declared dead and buried, he paints disturbing figurative monochrome canvases, sometimes in pale shades.

He uses photographic techniques such as cropping, framing, sequences of images and extreme close-ups.

Images that appear innocuous at first sight refer to disconcerting or disturbing subjects: a lampshade is from Buchenwald concentration camp, a broken doll, the hem of a skirt and a leg, a cut-out of a body or a face (Der diagnostische Blick series of 1992).

A number of paintings refer to a past that still impacts on the present: the holocaust in Gaskamer (1986), Belgian colonialism in Leopard (2000) and Flemish nationalism.

Tuymans calls his paintings ‘authentic fakes’. His disturbing works form a stark contrast with the easily and quickly digestible images of the media and advertising.

“Violence is the only thing that gives structure to my work,” he says.

Sam Dillemans is influenced by the timeless style of Van Gogh, Rembrandt, Rubens, Ingres and Picasso.

The brushwork of his portraits feature thick stripes and clear relief. His works contain lots of action and movement as Modernism, classicism and academism are merging into one. 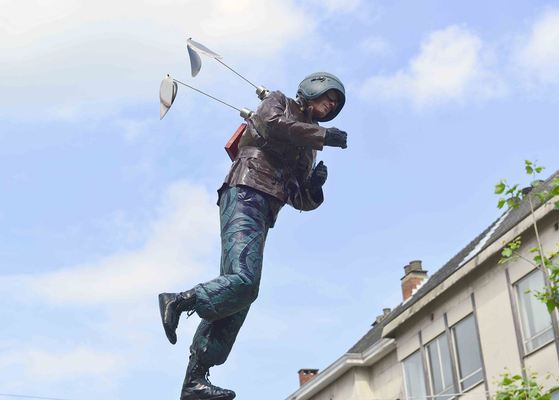 The most important Belgian seafood artwork is a casserole prepared with mussels, now empty, created by Marcel Broodthaers (1924-1976). Broodthaers was the first artist in Belgium to create a response to Pop Art.

He used symbols of Belgium, including the humble the mussel - that was his statement. Broodthaers thinks in black and white.

The mussels are black; the eggs – which are also shells - are white. White represents birth and purity. Black represents death.

After all, we have eaten all the mussels and the black pot is death too. In contrast, the casserole is bigger once you have eaten the mussels. So it is rising, it is an erection so to speak, or a virtual rebirth.

Jan Fabre wraps the pillars of a Ghent university auditorium in sliced ham, glues dead beetles to the ceiling of the Royal Palace or colours a castle with a blue ballpoint pen...

Writing in his own blood or getting dancers to perform in a harness, Fabre will turn his hand to anything.

As an artist, engineer, physician, inventor and visionary he investigates concepts such as space, movement, flight, energy and gravitation.

His work is a combination of artistic and technological experiments and takes various shapes: airplanes, U-boats, cars, flying carpets and birds.

All are spectacular constructions with an eerie beauty, playful and impressive at the same time. Panamarenko has always dreamt of being able to fly. He found his inspiration in the natural world of insects and the man-made realm of technology, physics and engineering. The result is a cocktail of design, science and imagination.

It is striking that Panamarenko never stops searching for technical solutions for his utopia – flight propelled by humans. To the artist It is not important whether the construction works or not, what matters is the intention, the search and the imagination.

Wim Delvoye is a controversial artist who enjoys international fame. Delvoye was featured in the world press with his tattooed pigs and the Cloaca machine that reproduces the human digestive system.

Delvoye also had texts and images tattooed on live animals, whipping up a storm of criticism in the process.

Conceptual artist Arne Quinze never ceases to surprise us with his large constructions in public spaces.

He made his name with Uchronia, a giant wooden installation at the Burning Man festival in the Nevada desert in America. His Rock Strangers can be seen on Ostend’s sea wall. Belgians have a long-standing passion for antique fairs and flea markets. For many years the cont...
Read More The city of Antwerp is the capital of Flanders but it is also the current capital of the diamond ...
Read More
GET LATEST BEER NEWS