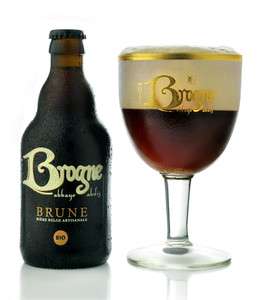 Dark abbey beers of the dubbel (meaning double) style form an essential part of the Belgian brewing culture. These beers tend to be comparatively strong and quite sweet with a full-mouthed taste.

Abbaye de Brogne Brune proves the exception to the rule as it is a 100% organic abbey beer that is relatively light with a rather dry taste. Roast caramel malts contribute a hint of coffee aroma.

Abbaye de Brogne was introduced by Brasserie Desfosses in 1982 and, in later years, was brewed by Affligem then Lefèbvre. The brand is now owned by brewer Bruno Deghorain of La Binchoise.

Thanks to Bruno, the Abbaye de Brogne Brune and Blonde are now brewed at a brand new microbrewery in the grounds of the abbey itself.

Bruno strives to produce beers that have a good balance in the glass, but set themselves apart from the competition. He has no time for just copying the classics.

A good beer should excite the nose and caress the taste buds according to the La Binchoise boss. The drinker is intrigued by what he has just tasted and orders a second glass.

La Binchoise is very much part of Belgium’s rich beer tradition, but is determined to make its own mark.

A stronger Abbaye de Brogne Spéciale Noël will be released in time for the end-of-year celebrations.

Abbaye de Brogne is an organic, top-fermented beer that re-ferments in the bottle.

This is an unfiltered, dark-brown beer with a fine pearlisation of bubbles and a slightly cloudy veil underneath a robust head of cream-coloured froth.

Just like its blonde version, Abbaye de Brogne Brune is served in a characteristic chalice decorated with gold text, the classic choice for abbey beers and Trappists.

In this rather dry beer, the malt comes to the fore straight away, giving impressions of nuts, coffee, chocolate and caramel.

The roast malt never upsets the balance of this beer. A mild, gentle, delicately bitter and fruity beer.

Abbaye de Brogne Brune makes a good pairing with beef stews such as karbonade, and also as an ingredient in these dishes.

Other excellent combinations include with confit of duck with a berry sauce, with goat’s cheese or dark chocolate.

The beer can be stored in the bottle for 24 months. On tap, it will keep for six months.

Available in bottles (33cl, 75cl) and on tap (20l). This beer is starting to find it's way out there, locally and regionally you should have no trouble sourcing some Abbaye de Brogne Brune via the usual channels; and with a bit of luck you may also be able to get it outside of Belgium.