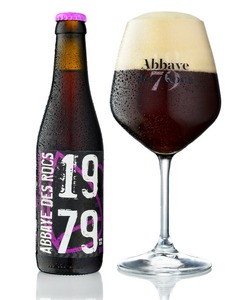 Abbaye des Rocs was the first beer from the Hainaut brewery of the same name. And when Jean-Pierre Eloir started brewing there in 1979 he was making Belgian beer history at the first ‘new wave’ microbrewery in the country.

Abbaye des Rocs remains justifiably proud of its traditional brewing process and its use of natural ingredients, including coriander, ginger, aniseed and liquorice.

It is far from easy to brew a balanced beer with herbs and spices; each herb must be used in the correct quantity to prevent a single ingredient from dominating and making the beer boring.

Abbaye des Rocs takes on a dark red-brown colour in the glass. You first detect aromas of red fruits, malt and hops, and on the tongue, you get impressions of roasted malt, aniseed, liquorice and hops.

The beer is brewed with water from the brewery’s own underground well without the use of artificial additives.

All of the beers from Brasserie de l’Abbaye des Rocs re-ferment in the bottle to preserve their aroma and taste and to enhance the beers’ complexity.

Abbaye des Rocs Blonde is the latest addition to a range that also includes Blanche des Honnelles, a white beer, and the amber Montagnarde.

Abbaye des Rocs is brewed with water from an underground well, a house yeast, malt, hops, and herbs and spices.

This beer is a dark red-brown in colour with plumes of bubbles rising below a dense head with the colour of café crème.

Abbaye des Rocs is served in a contemporary, tapered, tulip-shaped glass on a tall stem. It produces a fine head of froth and preserves the beer’s aromas to the full.

Aromas of red fruits, malt and hop are followed by a taste that will surprise you, with touches of roasted malt and impressions of aniseed, liquorice and hops.

This Belgian "Dubbel" goes with almost any hard cheese and/or Belgian Blue cheeses like an "Achelse Blauwe".

Taking it to the plate you will find a preferred partner with roasd lamb, pork or sausages.

Combined with a dessert we have only one suggestion; dark Belgian chocolate!

The recommended storage time is 12 months in the bottle and 6 months on tap (in kegs).

Abbaye des Rocs has been around for a while and although the production is relatively small for Belgian standards, let alone US standards, you will find their beer in Belgium as well as abroad..

Blanche des Honnelles
Witbiers, or white beers, are unfiltered, top-fermented beers. This traditional style was re-introduced in the 1960s by Pierre Celis, known for his Hoegaarden white beer and Celis White in the USA, where he moved after selling his ...
Facebook
Twitter
Google
Email
Pinterest
GET LATEST BEER NEWS