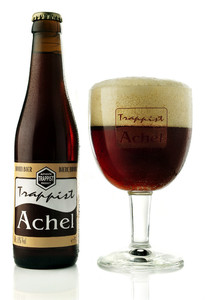 Achel 8 Bruin first saw light one year after the Achel 8 Blond. And unlike its somewhat troubled brother tripel, this dubbel was well received from the start. It especially hit the spot just across the border, in the Netherlands, where a Trappist beer is expected to colour dark-brown in the glass.

And in the end, how could it have been any other way? Not when Achel had the assistance of the legendary Brother Antoine. He moved from Rochefort Abbey to Achel in 1997.

This meant that the Limburg brewery had its own 'dark-side' Trappist beer specialist, right within its walls. So unsurprisingly, the Achel 8 Bruin comes across as a tasty marriage of Rochefort know-how and first-class natural ingredients.

While remaining a typical Trappist beer, it's also one that's easily drinkable. This dark-brown beer, with its aromas of dried fruits, tastes nicely full in the mouth – with surprising touches of caramel and coffee – but also manages to be very refreshing at the same time.

The finish is slightly bitter; the hop is never dominant, though. Although this is a filtered beer, traces of yeast do show up as a veil in the bottle. And, of course, there are no additives. All in all, a highly remarkable brew, thanks to the balance between the roasted malt and the fruity aromas coming from the yeast. This is how a dubbel should be.

Achel 8 Bruin is a high fermentation beer that re-ferments in the bottle. In the main fermentation stage, a yeast from the Van Steenberghe brewery is used. The re-fermentation is initiated with a dried yeast.

The Achel 8 Bruin is brewed with 100 % natural ingredients: water, barley malt, hops and yeast. No herbs or spices are added, either during, or after, the brewing process.

This is a beer that shows a dark chestnut colour in the glass. A pale creamy froth, not unlike a bubble bath, floats onto the surface of this delicious Trappist beer.

Just like all the other Belgian Trappists, the Achel 8 Bruin is usually tasted from its own, classically shaped – and above all sober – Achel Chalice. Fittingly perhaps, as the smallest brewery among the Trappists, Achel has the simplest glass, without even a gold print.

The Bruin has some surprisingly fruity aromas, of pear, banana, raisin and plum. Its taste betrays touches of caramel, biscuits, cakes and cookies. The malty palate is freshened up by a beautiful pearlisation, and it all culminates in a well-rounded bitterness.

Achel 8 Bruin is a great companion for rabbit stew with mashed potato and/or pumpkin. Also a fantastic pairing with dark Belgian chocolate. In the kitchen, this beer works well for the preparation of a number of dark sauces, or for use in stews – ‘Vlaamse Karbonaden’, for example, or pork chops the Flemish way.

Best stored in a cool and dark room. The taste will evolve after two years and oxidation may occur. So this is not a beer to keep much longer than two years.

Just like the Achel 8 Blond, the Achel 8 Bruin is available all the year around in small bottles. You can purchase it from the abbey direct, the abbey tavern, specialist drinks stores or some clued-up Belgian supermarkets. Outside Belgium, though, you will have to try that little bit harder – although many online beer shops will stock Achel's dubbel.

Achel 8 Blond
When the Trappist abbey of Achel started to withdraw from its agricultural activities, developing its brewery was seen as one way of increasing its sources of income. The monks quickly decided to bottle and sell their own beers...
Facebook
Twitter
Google
Email
Pinterest
GET LATEST BEER NEWS