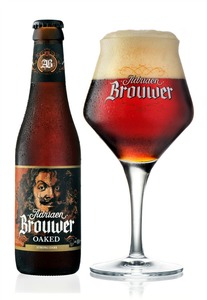 Adriaen Brouwer pays homage to the 17th century artist and painter, born and bred in Oudenaarde, who immortalised the five senses. The artist gained a reputation as a ‘bon vivant’ and his numerous scenes of life at the inn tell their own story.

Therefore, Adriaen Brouwer is taking up his own unique place within the beer style commonly known as Oudenaards Bruin.

In many respects this beer is quite different from other brown beers: the malt has been oasted for just that bit longer, and at a slightly higher temperature, which results in a darker colour.

This beer is brewed with mineral-rich spring water from the Flemish Ardennes where the Roman brewery is located. Also, they rely on a pure yeast instead of using spontaneous fermentation (using wild yeasts), which is how the brown beers from Oudenaarde are usually produced.

And finally, the production process does not involve ‘cutting’ or blending a young beer with others that have soured and matured.

Adriaen Brouwer Oaked builds on the heritage of Adriaen Brouwer WinterWood, a winter beer that used to enjoy great popularity. This wood-matured beer lists the oak from the whisky barrels as a proper ingredient in its own right.

At the cold storage phase a subtle touch of wood is added through wood shavings.

All of this results in a beautifully balanced, dark brown degustation beer where the impressions of caramel and dried fruits flow seamlessly into the mild, velvety finish provided by the whisky barrels. There is a hint of spices that reminds you of the winter beer.

A lovely clear brown beer with a delicate pearlisation underneath a collar of café-crème coloured froth.

Replete with complexity, a powerful nose of malt, caramel, dried fruits, wood and a slight hint of alcohol.

Full in the mouth, with a powerful taste, complex, once again the alcoholic impressions, malt, hints of caramel and wood, quite a mild finish with a bitter alcohol kick.

A superb digestive. One to be enjoyed by the open fire to finish off a meal in style.

Try it with a ragout of venison or a different game dish with mushrooms freshly picked from the forest. Good with Stichelton cheese or a Baba au rhum.

This bottled beer can be stored for up to 24 months. Due to the high alcohol percentage this one could be stored for longer when correctly preserved.

Adriaen Brouwer is only available in bottles (33cl, 75cl). This beer is as far from mass production as it gets so it only gets brewed in limited quantities; you won't find this one everywhere! However, the Classic and Tripel are easier tracked down.

Ename Tripel
This abbey beer has roots deep in local history. Its origins go all the way back to the Treaty of Verdun, concluded in 843. This landmark agreement made the river Scheldt the designated border between Flanders and the German empir ...

Ename Pater
The name of the officially recognised Ename abbey beers comes from the former Benedictine Abbey of Ename, close to the Roman Brewery near Oudenaarde. Ename abbey was demolished in 1797 during the days of the ...

Rebelse Strop
When, in the 16th century, the proud citizens of Ghent refused to bow their heads to the mighty Emperor Charles V, he decided to punish them for their stubbornness. He made them parade with a noose around their necks, hence the ...