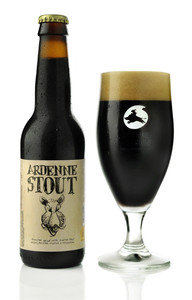 When English beers were celebrating their heyday in Belgium, stout was immensely popular. Stout tends to be a rather bitter, dark beer that is brewed using roasted or burnt malt. A variation on the theme is the strong Russian imperial stout of which this Ardenne stout brewed by Brasserie de Bastogne is an example.

Here we are dealing with a full-mouthed, pure malt beer with a high density. Tangy, roasted spelt malt is one of the ingredients, and in combination with hints of wood, this beer gives vinous impressions as well as aromas of chocolate, coffee and whisky.

Ardenne Stout is brewed with roasted and burnt malts from barley and spelt as well as three aroma hops. Dry hopping takes place at the end of the production process.

All of this leads to the creation of a balanced and complex yet eminently quaffable beer. This stout has a drier taste than a typical British stout and has a lower hop quotient compared to its American cousins.

The challenge for the brewer is to find the correct balance between the rounded mildness and bitterness provided by the malt, the bitter hop aromas – with fresh hop cones added for the dry hopping – and the tangy, slightly sour taste coming from the malted spelt.

This brewery’s range includes the Bastogne Pale Ale as well as the Trouffette family that comprises a double white beer (Belle d’Eté), a winter beer (Givrée), a blonde (Blonde), a dark one (Brune) and a beer made with herbs (Rousse).

Ardenne Stout is a top-fermented beer that re-ferments in the bottle.

The beer shows up black in the glass from below a cream-coloured layer of froth.

Ardenne stout is served in an elegant, tapered degustation glass on a tall stem, ensuring its aromas are beautifully preserved.

The initial impression is dominated by aromas of roast and burnt malt and fruits of the forest. Vinous impressions, wood and touches of roasted malt enliven the taste palette.

Thanks to the use of several different malts, the beer develops a rounded character in addition to the hop bitters that also make their presence felt.

This malty beer tastes full in the mouth and makes a perfect pairing with meat preparations such as pork chops steeped in the same beer or marinated, honey-glazed spare ribs from the grill.

It is also recommended with game preparations in a beer sauce, with blue-veined cheese of the Roquefort type and with desserts containing chocolate.

The brewer recommends storing this beer for up to two years in the bottle. On tap, it keeps for six months.

Ardenne Stout is available in 33cl bottles and on tap (20 l barrels).