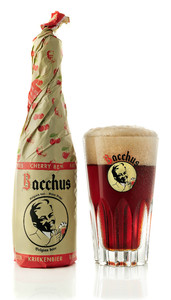 Bacchus Kriekenbier is a fruit beer based on Bacchus Oud Vlaams Bruin (Old Flemish Brown) with the addition of krieks (Morello cherries). The production process is similar to that of the St. Louis fruit beers (also in the hands of Castle Brewery Van Honsebrouck).

However, with St. Louis fruit beers, the fruit is maturing on gueuze-lambiek instead of Oud Vlaams Bruin.

Similar to the other beers in the Bacchus range, this beer comes in 37,5cl bottles and is enveloped in a paper wrap.

The Bacchus kriekenbier is characteristic for West Flanders which led to its recognition and accreditation as an official regional product.

This is similar to the "Appellation d'Origine Contrôlée" used in France. This accreditation will guarantee the origin and quality of food and beverages produced under a specific name and in a specific region.

Fermentation identical to that of Bacchus Oud Vlaams Bruin; mixed fermentation and matured in oak barrels.

In addition to the four natural basic ingredients: water, malts, hops and yeast, used for the standard Bacchus, the brew is enhanced with kriek cherries (15%), sugar and other sweeteners.

Bacchus Kriekenbier does contain real krieken cherries. The beer has a deap red colour, and is topped off with a beige-pink collar of froth.

Bacchus Kriekenbier is served in the same glass used for Bacchus Oud Vlaams Bruin and Bacchus Frambozenbier. A stylish, vintage-inspired glass that is reminiscent of a gueuze glass.

A fragrance of krieken and ripe cherries. Distant hints of the typical aroma of Oud-Bruin beers.

Mild in taste, first sip gives a slightly sour aroma, which soon gives way to a pronounced sweetness in combination with modest touches of wood and nuts.

The finish is mainly sweet although the touches of wood are still discernible. Sweet and sour form a perfect harmony.

Similar to its underlying basic beer Bacchus, the Bacchus Kriekenbier was not designed to be a gastronomic or culinary beer.

However, Bacchus Kriekenbier is a good table companion and makes a good recipe ingredient, particularly in the preparation of, for example, a banana sorbet containing Bacchus kriekenbier and/or a dark chocolate.

As this beer is an accredited regional product, it is a perfect combination with a number of characteristic Flemish regional dishes. Up to the beer lover to experiment and find out what suits.

Similar to its underlying basic beer Bacchus Oud Bruin, this kriekenbier can be stored for a while and will improve.

As with many other beers, storage conditions play a major role. Cool, dry and dark is always the message.

Like the Bacchus siblings Oud Bruin and Frambozenbier, this beer is in continuous production. It may be slightly more difficult to get hold of in supermarkets than the other well-known brews from the Kasteel range.

You can obtain it locally through your better off-licence and in specialised beer cafés. Abroad, thanks to the export efforts of Castle Brewery Van Honsebrouck, you will be able to locate it far beyond Belgium’s borders.

Kasteel Donker
Donker is the genuine flagship of the “Kasteel” range. Brewed since 1989 and the first, original Kasteel beer. The name is a clear reference to Ingelmunster castle owned by the Van Honsebrouck family. This beautiful castle is depi ..