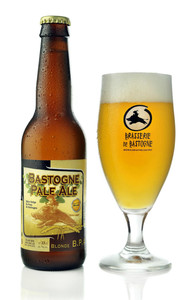 Bastogne Pale Ale is an Ardennes response to the India Pale Ale (IPA), although this version comes with a less pronounced bitterness. The IPA was launched by English brewers, who had made the discovery that strongly hopped beers were better able to withstand the long journey overseas to India.

IPAs helped consumers to develop a tolerance for more bitter-tasting beers. The style has now been picked up in many other countries, notably the USA.

Dry hopping with Cascade and Hallertau hop towards the finish of the brewing process adds bitterness to the beer as well as lending it surprising floral and herbal touches.

Roasted malt adds impressions of caramel. Bastogne Pale Ale joins the ranks of light, thirst-quenching beers with plenty of character. Its typical Ardennes flavour comes from the use of the ancient grain variety of spelt that thrives on the hard, rocky soil of this region.

The beer’s rustic character is emphasised by the picture of the wild boar on the label. This animal, which is found throughout the Bastogne region, symbolises the forests of the Ardennes.

Bastogne Pale Ale is an unpasteurised, unfiltered, top-fermented beer that re-ferments in the bottle.

This unfiltered beer takes on a golden blonde to light amber colour in the glass, with a cloudy veil and a luxurious, yellowish head of froth.

Bastogne Pale Ale is served in an elegant, tapered and high-stemmed tasting glass that preserves its aromas beautifully.

This beer is fragrant with grass, honey, flowers and grains. The hop bitters are toned down by the mild caramel flavours provided by the roast malt. The finish is light and dry.

The Bastogne Pale Ale makes a delicious pairing with tandoori chicken, gravlax (cured salmon) or with a light and refreshing dessert such as a panna cotta with exotic fruits.

The brewer recommends storing this beer for up to two years in the bottle. On tap, it lasts for six months.

Owing to its hoppy character, this style of beer is best consumed when young. Storing it for longer will not improve the taste.

Bastogne Pale Ale is available in 33cl and 75cl bottles and on tap (20l barrels). You are unlikely to find this beer in just any corner café or supermarket.

In the Bastogne region it won’t be hard to track down; elsewhere, try specialty beer stores and online.