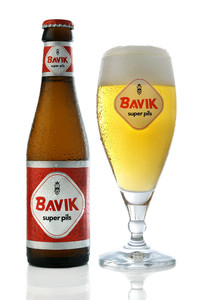 Bavik Super Pils’ name did not come out of the blue. In most pils beers, a higher-density wort is brewed and water is added after fermentation using the so-called ‘high gravity’ method.

But this is not how De Brabandere goes about its brewing. In the brewhall, all of the ingredients are added to the water straight away.

In other words, the ingredients are not diluted and this explains the “super” quality and full taste of this pils.

Bavik Super Pils is made using aroma hops only, which accounts for its characteristic, delicate and refreshing taste of hop bitters.

Towards the end of the brewing process the beer enters a long period of cold storage without pasteurisation.

Eight days spent in fermentation and 30 days in cold storage ensure that the beer is naturally clear with a stable, consistent taste.

Unsurprisingly, this pils continues to scoop awards. De Brabandere has stuck to its traditional recipe for five generations and, as always, time and quality prove the most important factors in producing a good beer.

Bavik Super Pils was recently given a retro-style make-over, with the oh-so recognisable Bavik logo, the red colour that harks back to a previous era, and the legendary “super pils” strap line.

Just like in the good old days, the name of Bavik Super Pils is once more proudly displayed on glasses, bottles and beer mats.

The beer takes on a pale blond colour when poured, producing small bubbles in the glass below a generous head of white froth.

Bavik Super Pils is served in a traditional, sturdy pils glass, with or without indentations, that allows the colour and aromas of the beer to come to the fore and preserves the frothy head. It can also be served in an elegant, tall-stemmed glass.

This is a slightly bitter, very quaffable and thirst-quenching pils with refreshing, delicate hop aromas.

This pils will happily keep you company whatever your menu.

It is great with pre-dinner snacks, cheese, cold meats, a barbecue, a summery salad, a steak or the tried and trusted combo of mussels and fries.

Bottled Bavik Super Pils can be stored for 12 months, and, on tap, it will keep for up to 6 months.

Remember with pils the baseline is always: "the fresher, the better". This beer style wasn't developed with aging in mind but to be drunk and enjoyed as young as possible.

The De Brabandere brewery has been standing strong for generations is their home province of West-Flanders so you will find plenty of café's around Belgium serving this pils.

Wieze
Even in country that is as steeped in beer as Belgium is the Wieze brand is iconic. That’s in part down to the Wieze October festivals, inspired by the famous Munich beer fests, that were ...
Facebook
Twitter
Google
Email
Pinterest
GET LATEST BEER NEWS