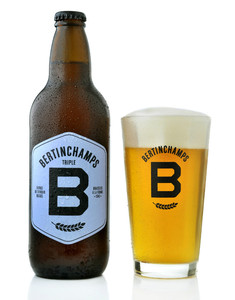 The Bertinchamps range includes the traditional trio of triple, blonde and brune. The beers are brewed with well water, malt from locally grown brewing barley, European hop varieties and a special yeast strain; no herbs are added to these.

Bertinchamps Triple is a rounded and extremely quaffable degustation beer. Aromas of flowers, freshly mown hay and roasted grains are reminiscent of the farm where the brewery is based.

The fertile Haspengouw soil vibrates in the glass. Bertinchamps Triple is a well-balanced, mild beer with a subtle, initial taste of caramel and hop bitters that flows into the finish.

Triples are a specialty of Belgian brewers. Belgian triples are predominantly golden-blonde in colour, slightly darker than the strong blond beers, and have a high alcohol volume.

Originally the term ‘tripel/triple’ was only used for Trappist beers, but it has now become a generic term for beers with higher quantities of brewing ingredients. These strong beers taste of malt and/or hop bitters.

Modern triples are fruity and dry with plenty of carbon dioxide and a lovely bitterness. The style remains very popular with Belgian beer drinkers.

Bertinchamps Triple is a top-fermented beer.

Bertinchamps Triple is brewed with water drawn from their own well, yeast, local barleymalt and Central European hops.

The beer takes on a lovely golden-blond colour in the glass with a delicate pearlisation under a creamy head.

The robust Bertinchamps glass feels good in the hand. The B, prominent in the logo, gives it a contemporary look and feel that is nevertheless deeply rooted in tradition.

Bertinchamps Triple is a full-mouthed, mild beer with aromas of flowers, freshly harvested hay and roasted malt. It is refreshing, with an initial taste of caramel and hop bitters coming to the fore in the finish.

This beer makes a good pairing with a mature, hard Belgian cheese, a firm fish or a robust piece of meat.

This triple also stands up to spicy dishes, Thai or Indian curries for example.

Bertinchamps Triple can be stored in the bottle for two years. On tap, it will keep for six months.

Always keep your bottles stored upright in a cool, dry and dark place.

Bertinchamps Triple is available in 50cl bottles and on tap in 20l barrels.

The brewery ships their beers around the world, so you won't have trouble finding Bertinchamps outside of Belgium.