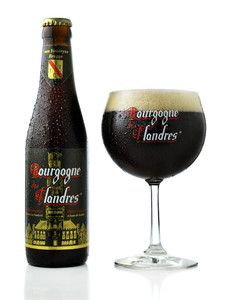 Bourgogne des Flandres is a ‘cut’ or blended beer, a category that is typical of Western Flanders and the Oudenaarde region.

This beer is characterised by the use of traditional lambic from the Zenne Valley near Brussels.

Bourgogne des Flandres is a blend of a dark, top-fermented beer and a lambic.

It could be described as an odd one out: brown, with an alcohol strength of just 5%, it is a mix of sweet and sour flavours and less pronouncedly acidic than some other Flemish red-brown beers.

The effect of the use of traditional lambic in this beer is quite remarkable. Bourgogne des Flandres contains a minimum of 30% wheat and aged hops (from the lambic, made at Timmermans) ensuring that bitter hop flavours never come to the fore.

Beers like this are created by spontaneous fermentation. The brewer does not add yeast and gives Mother Nature free rein.

When brewing is done the wort cools down in a large open cooling basin, or koelschip.

The wild yeasts (“Bretts” of the Brettanomyces family) in the air ‘infect’ the wort and encourage it to ferment spontaneously.

The fermentation process of lambic beers continues in oak foeders, a process that can take between two and three years.

Bourgogne des Flandres is one of the flagship beers produced by Anthony Martin Finest Beer Selection, which also includes the Waterloo beers as well as the Timmermans lambic beers, fruit beers, faro and gueuze.

Red-brown, as is typical of this particular beer style, below a delicate, lacy head of froth.

The aromas of this beer are brought to the fore by an elegant Bourgogne des Flandres chalice on a tall stem.

The aroma is malty and slightly roasted. This beer tastes slightly sweet and sour, with a moderately bitter finish of roast malt.

A great example is the stew of veal cheeks on offer in the brewery restaurant.

Van Tricht, the cheese master, would recommend a soft cheese from the Burgundy area, a cheese from the Mâconnais region or an ash-covered goat’s cheese to complement it.

We also recommend a pairing with blue-veined cheeses or smoked, soft goat’s cheeses.

Keeps in the bottle for 24 months. On tap: 12 months. Remember to keep your bottles upright in a dark, dry and cool place for optimal storage.

Available bottled (33cl, 75cl) and on tap (15 litres). Due to the extensive distribution and successful export network of Anthony Martin you will be able to find up this beer fairly easily both in and outside of Belgium.

From the more "beer orientated" café's to beer shops and even supermarkets, most of the usual channels stock this one.