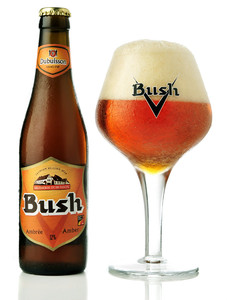 This is a venerable brew, which has recently marked its 80th anniversary. 1933 was the year that the Bush Ambrée (Scaldis Ambrée) was first introduced, under the name of Bush Beer. It is one of the oldest speciality beers in Belgium, and also the flagship brand of the Dubuisson brewery.

The Bush Ambrée contains only malt, hops, natural sugars, and water drawn from the well beneath the brewery – plus the distinctive flavouring from Dubuisson's exceptional house yeast. This is well-known for remaining active even at a high alcohol volume. Production time is four to six weeks.

Thanks to the high density of the malt in the wort, and that irrepressible house yeast, the alcohol volume is pushed up to 12%. That makes this one of the strongest beers in Belgium. The beer is exceptionally well-saturated, very easy to digest, so making for a superb digestive (and a great aperitif too).

Despite its high alcohol content, Bush can still be called an 'amberbier', the classic Belgian beer style (also called 'spéciale belge'), dating from the beginning of the 20th-century. That's when the Belgische Brouwers (the Federation of Belgian Brewers) introduced a contest entitled ‘Wedstrijd ter Verbetering van het Belgische bier’, or 'A Contest for the Improvement of Belgian Beer'.

The aim was to compete with the pils beers from abroad that were then flooding the market. The spéciale belge was the result, designed to be a drinkable alternative to pils. The beer style is rooted in the Belgian tradition of high fermentation beers, top-fermented beers, but balancing hop, malt and yeast more equally.

The Bush Ambrée stands head-and-shoulders above most of the others of this style, however, thanks to its supremely high alcohol content.

The Bush Ambrée is a filtered, high-fermentation beer.

A rich amber colour shining through, thanks to the roast caramel malt.

Bush Ambrée is served in the hand-blown, artisanally-produced Bush chalice, with its characteristic craquelé (a crackled texturing of the glass).

The Bush Ambrée is flushed with a bitter-sweet taste, and a pleasing consistency, courtesy, in part, of its balanced caramel malts. Those malts also introduce a strong streak of roasted nuts, adding to this beer's stand out flavour. Despite its initial filtering, the re-fermentation has given the beer a natural cloudiness, while also making for a mild and tender mouth-feel.

Bush Ambrée is more than suitable for use in the kitchen. Thanks to its bitterness, the beer is a great ingredient for cooking juices, or for marinating red meat and poultry. You may have to add a small amount of sugar to compensate for the bitterness.

Bush Ambrée is a perfect partner for chicken, most meat dishes, game or foie gras and oily fish such as eel. Also highly recommended in combination with a strong (blue) cheese or a sheep’s cheese. And a final tip: try adding a dash of Bush Ambrée to dark chocolate when melting it – sublime.

Bush de Nuits
The Bush de Nuits (Scaldis Prestige de Nuits) is a variant of the Bush range that was introduced in 2008. Like the Bush Prestige, it spends a long time – six to nine months – maturing in oak barrels, before hitting the bottle ...

Bush de Noël
The first reach-out beyond Bush Ambrée for Dubuisson, making its appearance in 1991, the Bush de Noël (Scaldis Noël) is a warm Christmas beer intended to liven up the dark days of winter. Although this beer isn't easy to find ...
Facebook
Twitter
Google
Email
Pinterest
GET LATEST BEER NEWS