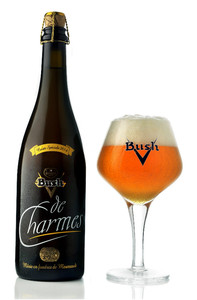 Bush de Charmes is the latest addition to the range of gastronomic beers offered by Brasserie Dubuisson that already include the Bush de Nuits and the Bush Prestige.

Hugues Dubuisson, in his never-ending quest for exceptional beers, came across the idea of letting his Bush Blonde mature in oak barrels previously used to mature the well-known Charmes Meursault burgundy. The brewery purchased 13 recycled ‘foeders’, containing 228 litres each, to start producing the Bush de Charmes.

In this case we are looking at a Bush Blonde that has not matured in storage tanks at a 0°C temperature – the usual procedure – instead, it spends four months maturing in these oak barrels, previously used to store the Charmes Meursault white burgundy.

This exceptional way of working has resulted in an extraordinary beer. The Bush de Charmes has a wonderfully complex character as well as a rich taste palette.

At the bottling stage, small quantities of sugar and yeast are added, after which the beer is left to re-ferment in warm chambers at a temperature around 25°C. Thanks to the re-fermentation the beer is saturated with carbon dioxide. It will also produce a naturally cloudy veil and a frothy collar.

A top-fermented beer that naturally re-ferments in the bottle.

Bush de Charmes is brewed with water from a well directly below the brewery, as well as three barley malts, two aroma hops, sugar and the house yeast.

A golden-blonde beer, which is slightly sparkling below its diaphanous collar of froth.

The first impressions are of the aromas of yellow and white fruits in addition to floral and citrusy touches and the vinous impressions provided by the Chardonnay grape.

We have here an exquisitely balanced, tender beer with a delicate bitterness and a subtle touch of sour that lends this beer its lively character.

In the kitchen the Bush de Charmes makes a perfect companion for shellfish, crustaceans, fish in a white sauce, foie gras or a summery salad.

This beer was conceived to be a gastronomic degustation beer. Its character will shine through in food pairing but not so much if it is being used as an ingredient in cooking.

The brewery recommends a storage period of 24 to 36 months. As this beer already comes fully fermented, it is not recommended to keep this beer for years after its best-before date.

The Bush de Charmes is available in large bottles (75cl). You can obtain this beer from specialist beer stores, or, with a bit of luck, from a number of supermarkets.

Due to the limited production you may have a hard time finding this unique Belgian beer.

Pêche Mel’ Bush
As the name suggests, Pêche Mel' Bush (Pêche Mel Scaldis) is a marriage between Bush Ambrée, perhaps the strongest of Belgian beers, and ripe peach juice. Allegedly it was students who came up with the concept (and the name): they ...
Facebook
Twitter
Google
Email
Pinterest
GET LATEST BEER NEWS