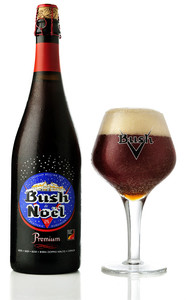 This beer is based on the Bush de Noël, a warming Christmas beer introduced by Dubuisson in 1991, which was intended to lighten up the long, dark nights of winter. Such Christmas beers tend to be malty, top-fermented beers with a hefty alcohol content. They are often dark, but can be amber-coloured. Many also involve the addition of herbs, but this is not the case for the Bush de Noël.

What makes the Bush de Noël Premium (Scaldis de Noël Premium) stand out as a winter warmer is its exceptional strength, thanks to its refermentation process. The large 75 cl bottles are placed in a heated room for 3 weeks, ensuring a more effective in-bottle ferment that eats up a little more of the Bush de Noël's sugars. That nudges the alcohol content up to a powerful peak of 13% ABV.

It also brings out a richer flavour profile from the already full-flavoured Bush de Noël. Although it is beer is produced in limited volumes, the Bush de Noël Premium is widely seen as being at the pinnacle of wintry seasonal beers.

The Bush de Noël Premium is a 100% filtered, high fermentation beer that will re-ferment for three weeks in the warm room.

Water drawn from the brewery's well, candi-sugar, barley malt, hops and the brewery’s own yeast.

The Bush de Noël Premium owes its coppery red colour to the use of roast caramel malts.

Bush de Noël Premium is served in the Bush chalice, produced by hand by artisans, and adorned with the characteristic crackled (craquelé) glassy finish.

Despite its potency, Bush de Noël Premium delivers a nicely-rounded character, partly through an attentive blending of roast caramel malts. The hops also appear carefully balanced and dosed, so the beer develops their subtle aroma, alongside its richly fruity taste. Altogether it makes for a bountiful, but pleasingly consistent, drinking experience.

A strong Christmas beer like the Bush de Noël Premium makes an obvious pairing with chocolate. In that case, the best choice is a slightly-bitter dark chocolate, which can bring its own distinctive taste to the palate – definitely needed to stand up to this beer. Also a perfect combination when used with desserts using melted chocolate.

A minimum of 24 months and a maximum of 36 months.