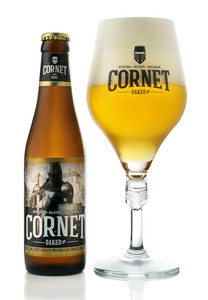 Microbrewery De Hoorn was re-established in 2014. With the launch of its Cornet, Brouwerij Palm is harking back to the tradition of oaked beers, where oak is used to create the taste.

The Cornet will amaze you with its very subtle, wilful but refined taste of wood and a silky, mouth feel. Taste the successful balance between the fruitiness of the yeast and the vanilla sweetness coming from the wood.

he long finish provides a touch of warmth accompanied by a mild bitterness.

The beer was named after Theodoor Cornet. In the 17th century, he was the inn keeper of Afspanning De Hoorn in Steenhuffel, in charge of brewing and distilling.

At the request of the Count of Maldeghem-Steenhuffel, Lord of the Manor of Diepensteyn, Theodoor started brewing a beer that was meant to be a ‘keeper’.

This beer would mature in oak barrels in the cellars of Diepensteyn Castle, which had by then been acquired by the brewery.

In 2014 the Steenhuffel brewery site saw the installation of a microbrewery called… De Hoorn - and this is how Brouwerij Palm has returned to its village brewery roots.

The slightly sparkling beer shows a golden-blonde colour in the glass and is covered by a sturdy white collar of froth that stays beautifully upright.

The aromas are done absolute and perfect justice in the elegant branded chalice that is tapered towards the top and rests on a tall stem. The stem of the glass bears the insignia of the Count of Maldegem-Steenhuffel, Lord of Diepensteyn.

This strong blond beer, cold-stored on oak, retains the balance between the fruitiness of the yeast and mild vanilla touches provided by the wood.

The round, warm finish with its mildly bitter undertones is particularly striking. The characteristic mouth feel rivals that of oak-matured wine.

Cornet will keep for 24 months in the bottle and for 6 months on tap.

Palm
The Palm Brewery was founded in 1929. Their amber beer is a ‘Spéciale Belge Ale’. This beer style was created early in the 20th century by Belgian brewers, to provide an alternative to the increasingly popular pils. This top-ferme ...
Facebook
Twitter
Google
Email
Pinterest
GET LATEST BEER NEWS