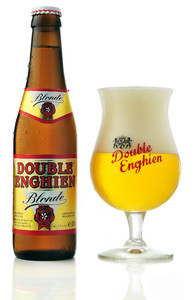 The original Double Enghien that was brewed by Tennstedt-Decroes, in Enghien, was an amber saison. When Brasserie de Silly bought the brewery, they changed the Double Enghien into a straight blond beer, as they already had a saison – the Saison de Silly – in their range. Several variants of the Double have since been introduced.

First, in 1986, a dark version was launched, to be followed by a strong blond Christmas beer in the nineties. That was to replace the former Silly Christmas beer, which was based on the Scotch de Silly.

For Enghien itself, this set of beers is an important part of their town's culture, and a brotherhood – the Confrérie de la Double Enghien – exists to honour this most local of beers. Such confréries very much belong to the local tradition of southern of Belgium, playing an active role in promoting regional products such as speciality beers.

Blond beer with a thick froth that clings to the glass.

The Double Enghien Blonde strikes first with its spicy and hoppy aromas, following through with flavours subtly wrapped around a full body. There is a shrug of acidity tickling on the tongue and a nice dry bitter aftertaste. A well-balanced beer, in which no ingredient is overpowering.

Double Enghien Blonde is cookable, and nice to combine with a classic stew. Also delicious steamed with mussels and clams, accompanied with leeks baked in butter – plus maybe an endive salad on the side too – with toasted bread to help clear the sauce.

In food pairing, some bold dishes spring to mind – ‘fried egg sunny side up with cauliflower, boiled ham and parsley’, maybe; or ‘salmon with grapefruit, avocado and licorice’; or perhaps a ‘veal with asparagus, fava beans and tarragon’ would do the job nicely.