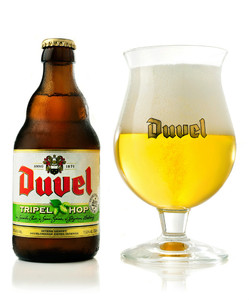 Whereas the classic Duvel is traditionally brewed with two varieties of hops, the Tripel Hop (as its name indicates) involves the addition of a third variety of aroma hops. The Duvel Tripel Hop was produced for the first time in 2007, but only as a one-off limited edition.

After a bet with Michel Moortgat, and an associated Facebook campaign, the Belgian beer tasters’ association called “Lambiekstoempers” (presided over by Johan Madelijns) collected 12,000 signatures, leading to the beer being taken back into production in 2010.

This beer has now been part of the standard Duvel-Moortgat range since 2012. Although the basic ingredients are the same as those used for the traditional Duvel, each year a new aroma hop is selected to become that third hop variety.

2010 saw Amarillo hops used, in 2012 Citra hop was selected, while in 2013 the brewery plumped for a Japanese aromatic hop variety called Sorachi Ace. In 2014 head brewer Hedwig Neven chose Mosaic hops. In 2015 the third hop chosen was Equinox. For Duvel Tripel Hop 2016 the third hop selected was so new that it was just a number; HBC 291, an experimental hop variety hailing from the Yakima Valley.

After putting the six different Duvel Tripel Hop blends into a limited edition Duvel Tripel Hop tasting pack in late 2016, fans got the chance to vote for their favorite. Citra came out on top and will be permanently used as the third hop variety from 2017.

The Tripel Hop is based on the dry-hopping technique, where the bells of the aromatic hops are added, not only during the cooking stage in the brewing room, but also during the maturation phase.

This adds to its pronounced aromatic flavour, giving a richer taste palette, additional hop aromas and a more powerful bitter flavour. The Tripel Hop also packs more of an alcoholic punch than its elder brother.

This is a top fermented beer that re-ferments in the bottle. Just like the standard Duvel, the Duvel Tripel Hop needs to rest to fully develop its flavours.

The beer re-ferments in warm and cold storage rooms in turn, which is why it takes three months after brewing before the Duvel Tripel Hop leaves the brewery.

A golden blond beer, with the characteristic creamy-white Duvel head, and tiny bubbles. This beer is slightly less clear than the classic Duvel.

The Duvel Tripel Hop is served in the same unique glass that's used for the classic Duvel: its well-known tulip-shaped glass is perfectly suited to this refined beer.

An elegant but pronounced bitterness with a dry finish. Its citrusy fruitiness and hoppy bitterness are well-balanced by its alcohol content, and combine to make a complex and refined marriage. Intense pearlisation.

It’s also a great companion to many unpasteurised cow’s cheeses (the superb 'Achelse Blauwe' or Grevenbroecker for example) and also to unpasteurised ewe's milk cheese.

As with the standard Duvel, the bottle can be stored for around 30 months. Up to two years after bottling, the beer will retain its taste and colour - but longer storage will affect the beer’s hoppy bitterness.

The Duvel Tripel Hop is only available in 33cl bottles. Bottles containing 75cl have been marketed in the past but are no longer on sale.

Like the classic Duvel, this beer can be found in Belgium and beyond, both in specialised beer shops and online.

Pre 2017 Tripel Hop Citra versions are on sale as long as stocks last. A number of specialised cafés will serve several vintages.