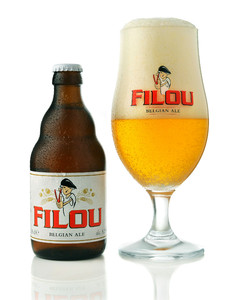 Filou is not just yet another Belgian strong blonde, so many of which have come onto the market recently - 13 to the dozen definately does not apply here. Filou is French for rascal, and with a name like this, you would expect to be fleeced. Is the brewer getting one over on us? No, he is not.

The newest addition to the Van Honsebrouck stable only saw the light in 2014. Filou is an honest and pure beer, what you see is what you get, brewed using only water, yeast, hops and malt.

It does not set out to mislead you, but rather to seduce you, and goes down surprisingly easily when you bear in mind that has an ABV of 8,5%.

Luc Van Honsebrouck packed a punch in the 1980s with the well-known Brigand. Filou may have something in common with Brigand, but at the same time, you cannot place these two beers side by side without noticing the differences.

The Brigand is slightly bitterer and noticeably far drier in the finish.

In the words of the creator of this Belgian speciality beer, Xavier Van Honsebrouck: “Before you know it you will have asked for seconds…” If you do, you’ll enjoy another full-mouthed, slightly bitter beer with a beautiful balance between hops and malt. The name could equally apply to the drinker according to Xavier.

Filou is a top-fermented beer that re-ferments.

This beautifully golden-blonde, crystal-clear beer gives out tiny bubbles from beneath its luxurious head of white froth.

Served well in the appropriate glass, the frothy collar will stay for quite a while.

The rascally Filou stares at the drinker, challenging him, catapult at the ready, from a slender tulip-shaped glass of the Munich type, set on a high stem. This is a great glass for preserving aromas and maintaining the head of froth.

Filou is a Belgian beer that offers a beautiful balance between hops and malt; it is full in the mouth, pure and slightly bitter.

Easily drinkable but, at the same time, with plenty of character.

This beer would not be our first choice for use in the kitchen. The Van Honsebrouck brewery has better candidates for culinary use, such as its Cuvée du Chateau or Kasteel Donker.

However, as a partner to white meat, poultry, fish, shellfish and crustaceans; a red-veined cheese or a Comté cheese, this beer comes highly recommended.

Filou is very enjoyable with spicy Asian dishes like a Thai curry.

Filou was not conceived to be stored for years on end in your private cellar. A beer of this type is best drunk young. On tap, the beer will keep for 12 months.

This beer is available on tap and bottle. However, Filou has become very popular within a short period of time, and is now being exported.

Kasteel Donker
Donker is the genuine flagship of the “Kasteel” range. Brewed since 1989 and the first, original Kasteel beer. The name is a clear reference to Ingelmunster castle owned by the Van Honsebrouck family. This beautiful castle is depi ...
Facebook
Twitter
Google
Email
Pinterest
GET LATEST BEER NEWS