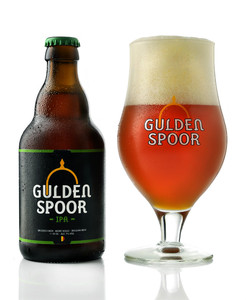 The Gulden Spoor beers from the eponymous brewery in Gullegem near Kortrijk reflect their connection with the area of the Leie. They are named after the historic battle that took place at the nearby Groeningekouter in 1302.

The Gulden Spoor IPA (India Pale Ale) is a well-hopped beer inspired by a tradition that originated in Britain.

With his Gulden Spoor IPA, brewer Björn Desmadryl is not intending to follow the trend for extremely bitter IPAs. Instead, he has produced a very quaffable, zesty, deep blond beer with a sturdy collar of froth.

Several varieties of Belgian hops were used for this IPA. The rich palette of aromas and flavours ranges from mildly fruity to strongly bitter. This bitterness is modified through the use of aroma hops.

This means that the restaurant menu is completely geared towards the beers produced on-site. You will find succinct beer pairing tips on each bottle.

Top fermented beer with re-fermentation in the bottle.

The unfiltered, deep blonde beer develops a slightly cloudy veil and gives out tiny bubbles underneath a cloud of froth.

The beers of Gulden Spoor are poured into an elegant tulip-shaped glass on a tall stem that preserves the sturdy collar of froth and allows the aromas to linger.

The hop aromas of this IPA vary between fruity (mango and citrus) and zesty with a hint of pepper.

The alcohol reinforces the pronounced hoppiness.

The bitterness is tempered by the residual sugars in the beer.

This IPA goes equally will with a hamburger, fries and mayonnaise, with fish & chips or with mature, salty, crumbly cheeses like a Comté or an Oud Brugge.

Gulden Spoor IPA can be stored in the bottle for up to nine months. On tap, it will keep for six months. In common with all IPA's there is no need to keep it any longer than advised by the brewer.

Available in 33cl bottles, a 75cl limited edition bottle or on tap (20l)

In and around the Kortrijk area you will have no trouble finding this brew in specialised beer cafés or shops; and of course, there is no better place to taste it than in the ’t Rusteel beer restaurant right next to the brewery.

Although Gulden Spoor is a young brewery the beer has also started to find its way abroad so you will be able to get hold of it outside of Belgium as well.