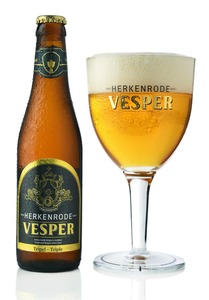 Monks live their lives to the rhythm of prayer. Vespers is the evening prayer said just before sunset, and it has served as the inspiration for the Cornelissen brewery’s Herkenrode Vesper Tripel.

Like the patient monks you should take your time with this new degustation beer, which will reward you with its striking golden-blonde colour and impressive, full-bodied character.

The Herkenrode beers are named after the Abbey of Herkenrode near Hasselt. It is no longer a working religious house, but the 17th century abbey farm and stables still stand, now renovated and home to a tavern, alongside the herb garden.

The history of the abbey goes back to the 1182, and research has shown that brewing was done at the site so Herkenrode beers can be ‘recognised abbey beers’.

Robert Putman, former engineer-brewmaster at Cristal-Alken, joined forced with Patrick Gerits, the master brewer at the Cornelissen brewery to track down the recipes for all of the beers of the Herkenrode family.

You can judge whether brewery supremo Jef Cornelissen, Robert and Patrick have managed to meet their aim to ‘brew beers with the bravery of the Counts of Loon, the elegance of the abbesses of Herkenrode and the aromas of the herb garden.’

This is a top-fermented triple that re-ferments in the bottle.

This beer takes on a golden blonde colour with delicate bubbles underneath a lovely white head.

Herkenrode Vesper Tripel is served in an elegant, tall-stemmed chalice that produces a beautiful head and preserves the aromas of the beer to the full.

This is a full-bodied tripel with a pleasant bitterness, a very slightly sweet touch of malt and a robust finish thanks to the high alcohol volume.

Herkenrode Vesper Tripel makes a perfect match with strongly flavoured dishes thanks to its robust finish and pleasant bitterness. We think it is best with meat dishes or pastas with lots of herbs and spices.

Kept under the right conditions this beer will keep in the bottle for 24 months.

Always keep your bottles upright in a cool and dark place for optimal conservation.

Brewery Cornelissen is a househould name in its native region of Limburg but the brewery also exports as far afield as Asia and Russia.