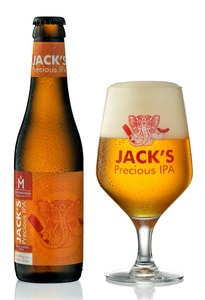 When you’re standing at the bar, beer loosens the tongue. Brouwerij The Musketeers is very much aware of this. Jack’s Precious IPA is named after the eponymous Asian elephant that used to live at Ghent Zoo. Legend has it that the animal ended up in a Dutch sausage factory, but the real fate of the unfortunate pachyderm is surrounded by mystery up to this day. The elephant’s memory is kept alive on the label and also in this IPA, with its floral bouquet and hints of citrus. Its taste is subtly fruity - without the floral touches becoming dominant - and the zest from the hop bitter.

The influence of the craft beer movement comes through in the chosen beer style and the ingredients, especially the exotic aroma hops, but these balanced, bottle-fermented beers are also clearly built on respect for Belgian tradition. The brewery was inspired by Belgian legends to produce its Antigoon and Jack’s Precious IPA. Their Bucket List range is the brewers’ response to the international craft beer trend. Brouwerij The Musketeers has established a name for itself with its Troubadour beers Blond, Magma, Imperial Stout, Magma Maris Otter, Magma Hop Twist, Obscura, Westkust, Magma Oak and Spéciale. In 2019 the brand new brewery becomes operational at the site of a former brickworks and next to a golf club. Sample the beers in the brewery café or on the spacious terrace.

In the glass the beer takes on a pale golden colour underneath a robust, snowy-white collar.

Jack’s Precious IPA is served in an elegant, tall-stemmed chalice that narrows towards the top, in which the collar and aromas are beautifully preserved. The elephant takes pride of place on the label.

A perfect pairing with rabbit and prunes, blue-veined cheese and curry dishes.

Will keep in the bottle for 24 months. In kegs, the beer will keep for 18 months.