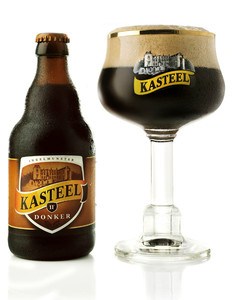 Donker is the genuine flagship of the “Kasteel” range. Brewed since 1989 and the first, original Kasteel beer. The name is a clear reference to Ingelmunster castle owned by the Van Honsebrouck family. This beautiful castle is depicted on the label as well as on the bottle top and the glass.

When the brewing process has ended, this beer will rest for a minimum of six weeks before it is allowed to leave the brewery.

A special feature of this brown artisanal beer is that it was hopped using hops from England. Over the years the beer has changed its name various times. Originally launched as Kasteelbier Donker, it morphed into Kasteelbier Bruin and Kasteel Bruin before returning to its roots: Kasteel Donker.

Just like with Kasteel Rouge and Kasteel Blond, the name gives it away. As you would imagine, Kasteel Donker is a beautifully dark brown beer with an attractive frothy collar.

A Kasteel Donker is preferably poured into and experienced from the appropriate Kasteel glass with the golden rim.

Kasteel Donker is a fully rounded and creamy beer with touches of chocolate, banana, liquorice and raisins. It has a sweet taste and aroma with noticeable accents of port.

Goes down easily despite the 11% alcohol volume.

Kasteel Donker is positioned as a culinary degustation beer. Its uses are numerous, both in the kitchen and on the table. Thanks to its full taste and pronounced sweet touches it is perfect in combination with game, stews and roast meats.

As to cooking with beer, Kasteel Donker will undoubtedly add value, for example if you use it to prepare one of the undisputed highlights of Belgian cuisine, delicious Flemish Stew.

Unlike most other siblings in the Kasteel family, this beer is eminently suitable for laying down. Even more so if you are aware that the taste of the Cuvée du Chateau is based on that of a ten-year old Kasteel Donker.

Even now, the brewery still has limited quantities of Kasteel Donker harking back to the early days. After a number of years of storage under optimum conditions, this beer will make its presence known in a more pronounced way.

As an important representative of Castle Brewery Van Honsebrouck this beer is in continuous production. Next to getting hold of Kasteel Donker through resellers and supermarkets, you will be able to find fairly easily via (online) speciality beer shops.

You also won’t have any problems finding Kasteel Donker in the more beer orientated bars and cafés, certainly when travelling the Westhoek. As with many of Castle Brewery Van Honsebrouck's brews, Kasteel Donker is exported across the globe.

St. Louis Premium Gueuze
Premium Gueuze is the flagship brew of the St. Louis range and one of the jewels in the crown of Castle Brewery Van Honsebrouck. This was by no means certain when Luc Van Honsebrouck decided, a few decennia ago, to start gueuze pr ...
Facebook
Twitter
Google
Email
Pinterest
GET LATEST BEER NEWS