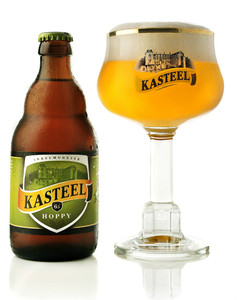 Kasteel Hoppy is a recent addition to the Castle Brewery Van Honsebrouck Kasteel range. It was launched in 2013 in response to the trend for more hopped beers. This is a high fermentation blond beer, rich in hops, and thanks to this abundance it has a bitterness level of 45 EBU.

As far as alcohol content is concerned, this is the lightest beer in the extensive “Kasteel bier” range.

What makes this beer special is the use of 100% Belgian hops selected on strict criteria. It is especially astounding if you bear in mind that the Belgian land area is simply too small to grow all the hops required to satisfy the immense demand from Belgian brewers.

Kasteel Hoppy is a fresh, summery thirst quencher which has its own unique character. Despite the preponderance of hops, there is also a prominent malt flavour.

This is a beer that does not pretend to be more than it is. Some say that its taste is reminiscent of a Spéciale Belge.

Beautifully clear beer, with a golden to coppery colour, has a solid frothy collar when poured correctly.

Preferably served in the characteristic “Kasteel” glass, with the well-known golden rim.

Fairly neutral to smell, with a somewhat grassy, softly floral perfume with a hint of herbs. Very mild in taste. The bitterness from the hops is rather subtle and far from overwhelming, but it increases as you consume more and also in the aftertaste.

This is partly due to the use of Belgian hops.

Although we normally do not advise the use of strongly hopped beers for culinary use, we will make an exception for the Kasteel Hoppy.

As the bitter flavour of the hops is really rather subtle, this beer does have its use in the preparation of certain recipes.

It makes a good pairing with certain types of molluscs and crustaceans, such as mussels or grey shrimps, and will be an excellent companion with grilled or roast meats or the ultimate Belgian dish: steak and fries.

Kasteel Hoppy confirms the rule. Strongly hopped and light beers are not brewed to be stored. Their hoppy character will decrease over time.

Although the beer comes with a best before date of approx. two years, our advice is to consume this beer as young as possible. Its taste will not improve with storage.

As a relatively new member of the family of “Kasteel” brews the Hoppy is still finding its way to the general public. This will only grow in the future as Kasteel in general is popping up on more and more shelves.

It can be acquired through resellers, supermarkets and of course (online) specialized beer shops.

You won’t have trouble finding Kasteel Hoppy in the more beer orientated bars and cafés in Belgium.