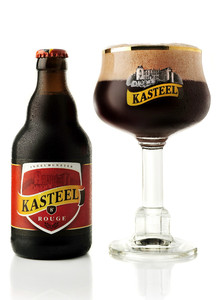 Kasteel Rouge uses Kasteel Donker as a motherbeer. The beer was launched in 2008 and is the “fruitiest” offering within the Kasteel beer range.

As it is produced in a different way from the typical Belgian fruit beers, brewer Xavier Van Honsebrouck prefers to call this a “fruity” beer rather than a fruit beer.

In contrast with the majority of fruit beers, which includes the St.Louis range from Van Honsebrouck, this beer is not made by adding cherries or other fruits to young lambiek.

Whereas the majority of Belgian fruit beers are losing market share, the production of Kasteel Rouge has been stepped up considerably recently.

As this is a blended beer, please see the “mother beer” Kasteel Donker

Kasteel Rouge starts off as Kasteel Donker which is brewed with a number of natural basic ingredients: water, yeast, sugar, hops and barley malt.

With a ringing name such as this you can only expect a deep ruby-red colour.

Legend has it that a real Knight only drinks his Kasteel from the characteristic Kasteel glass, with the golden rim of course.

You discover alcohol, cherries, other types of fruit as well as touches of chocolate and pepper.

All of these make for a fresh and zesty experience which, the brewer assures us, makes you want to drink more.

The more you taste this beer, the more you get past the sweetness and the higher your appreciation for its unique and complex character.

Kasteel Rouge can be seen as a gastronomic beer for many occasions. It is very suitable as an aperitif if it is served really chilled.

It is a sweet and summery beer, to have with a barbecue for example, or with dessert of just to enjoy it when you fancy it.

Its pronounced sweet character makes it the perfect beer to experiment with when preparing desserts.

As Kasteel Donker is the mother beer, Kasteelbeer Rouge quite lends itself to be stored for a while if kept correctly under good conditions.

However, unlike a traditional “Oude Kriek”, don’t keep it for years.

Kasteel Rouge is is an important member of the Van Honsebrouck family. In the USA, Israel and other countries, the beer is very popular. A considerable proportion of Kasteel Rouge’s production is therefore destined for the export market.

It’s reasonably easy to get hold of in countries that have developed a taste for Belgian beer.

The beer has found increased distribution in Belgium also. It’s quite easy to locate in supermarkets, specialised cafés and (online) beer shops.