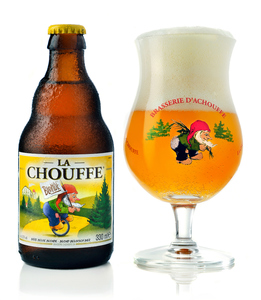 La Chouffe is Brasserie d’Achouffe's star brew. This strong blond ‘gnome beer’, first brewed in 1982, today accounts for 80 per cent of the brewery’s output. Not only did the brewers make history with this, their first Ardennes tripel, but the story of the beer’s origins also went down a storm: how it was brewed from an original recipe, whispered into the brewers’ ear by gnomes from the Houffalize area.

La Chouffe is an unfiltered blond beer, re-fermented in the bottle, as well as in the barrel. It is pleasantly fruity, spiced with coriander and has a mild taste of hops. A La Chouffe embodies 'the sun in a glass' with its splendidly intense golden-yellow colour, and creamy collar of froth. Herbal fragrances make for a playful entrance, then the citrus makes itself known, followed by the refreshing aroma of fresh coriander.

These flavours combine into a flowery character that is perfectly complemented by a banana-like fruitiness, which can also be picked up in the taste. The coming together of these fresh fruity flavours ensures that the beer never has an over-heavy mouth feel at any point. The finish is agreeably herbal and peppery. La Chouffe is easy to drink and the first readily has you contemplating a second.

La Chouffe is a high fermentation beer that re-ferments in both the barrel and the bottle. After the main fermentation and maturation, the re-fermentation is encouraged by the addition of sugar and yeast, just before bottling.

This unfiltered beer has a golden colour and a cloudy aspect, with a rich white collar full of pearly bubbles. It needs to be poured slowly, in stages. Add the yeast at the end of serving.

As a rule, La Chouffe is served in the 33cl tulip-shaped glass but you will also come across 25cl and 12cl sizes. The Chouffe glass can be purchased from the brewery shop, the online shop and through specialised beer stores.

A great, full-in-the-mouth thirst quencher, with the fruity aromas of peaches and apricot, citrusy touches, coriander and a subtle hoppiness. The beer has an amazingly pleasant taste with its combined herbal, malty and fruity aromas.

Other great combinations can be made with cavaillon or other melons, honey or the unpasteurised cow’s cheeses Fleur d’Audresselles (from Northern France) or the Beaufort Haut Alpage (from the French Alps). The beer is also used to wonderful effect in the sabayon, which you can enjoy in the brewery tavern.

This beer will keep in the bottle quite readily, for up to 36 months, and for one year in the barrel. Up to three years after bottling its taste and colour will evolve. Best stored in a cool and dark space. Barrels should be stored upside-down to encourage the yeast to mingle. Bottles must be stored in a vertical position.

La Chouffe is available in 33cl and 75cl bottles - the latter is called Big Chouffe – and in 20l barrels. The beer is widely distributed, in both Belgium, and far beyond its borders. So you'll find it easy to track down in cafés, supermarkets or beer shops.

Houblon Chouffe
The Houblon Chouffe is a crossover beer – a Belgian interpretation of the India Pale Ale (IPA), a beer style originating in England. Extra hops were added to these ales, to make sure the beer survived the long sea voyage to India ...
Facebook
Twitter
Google
Email
Pinterest
GET LATEST BEER NEWS