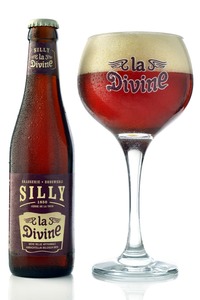 La Divine is a beer that was created by Silly upon request. A beer distributor from Battice, in the area of Liege, had found an old local recipe. He asked Brasserie de Silly to produce a beer from it, back in the early nineties. Silly promptly obliged.

La Divine is a very strong amber triple, one that's smooth and easy to drink. Accessible for most beer drinkers and yet complex enough in taste and flavours to please the experts. This is definitely a beer to enjoy when you have the time set aside for it. The name ‘La Divine’ is said to refer to the divine qualities of the brew - and maybe to the ‘divine chance’ to have found that original recipe.

La Divine is best poured into its branded tulip-shaped glass.

La Divine strikes the nose with aromas of barley and wine, sweet candy-sugar tones, with plenty of fruitiness. The taste is slightly sweet and fruity, with just a touch of caramel. The aftertaste is long. A beer with a rich mouth-feel and hoppy notes.

Try it with a pizza for starters. Also delicious in a sabayon as dessert.

Green Killer IPA
Brasserie de Silly enjoys a reputation as a traditional family brewery producing honest Belgian specialty beers - the Scotch de Silly or La Divine for example. However, this brewery, with roots going back to the 1800s, also marke ...

Scotch de Silly
Scotch de Silly is a beer with a powerful echo of World War I, tracing its origin to the turmoil of that conflict. At that time, outside of the city of Silly, a regiment of Scottish soldiers were stationed. When they requested a ...
Facebook
Twitter
Google
Email
Pinterest
GET LATEST BEER NEWS