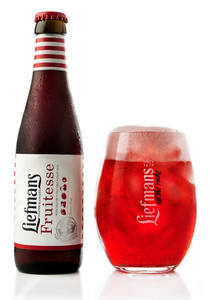 The youngest member of the Liefmans family was introduced some years ago, in the summer of 2009, as an ideal summery aperitif beer – one that could be served on ice. “Fruitesse on the Rocks!” is its tag-line.

Fruitesse doesn't pretend to be a complex degustation beer, because it is anything but. However, what it does do, it does brilliantly: it is a young and innovative beer, with a fruity freshness, and an appeal to a broad swathe of the public.

So this is no classic 'kriek'. Rather, it is a blend of beer with natural fruit juices. The brewery states that its Fruitesse is a fruit beer that's just as a fruit beer ought to be. Fresh, and with a vivid red colour, it grabs your attention straight away, and doesn't let go.

The same can be said for its nose. Once the aroma from the glass reaches invades your nostrils, there's no escaping it – an overwhelming fruit aroma, dosed with a shot of almond.

The taste of the beer is satisfyingly sweet, without being syrupy, and does full justice to those red fruit aromas. Even the aftertaste does not let you get away from its luscious, fresh fruitiness . It's the kind of beer that could also serve as an ideal ingredient for creative cocktails.

Thanks to the use of natural juices, this beer has a vivid red colour and is relatively clear. It offers a beautiful light pink collar when poured correctly (around two fingers deep).

A glass was developed especially for this Liefmans Fruitesse: the Liefmans (On The Rocks) tumbler glass 2/3 of which is filled with ice cubes.

In the kitchen it makes a great ingredient in the preparation of desserts, such as a 'Panna Cotta with Liefmans Fruitesse and Fruits of the Forest', or a refreshing sabayon.

Liefmans Fruitesse will keep in the bottle for approximately 18 months and for one year, on tap.

This is not really a beer for storage, though, unlike the Liefmans Goudenband or Kriek Brut, which can easily be stored for 10 years.

Liefmans Fruitesse is available in 25cl bottles and on tap. In view of the immense popularity of this beer you will find it easily, in cafés, supermarkets and beer shops.

As Liefmans is part of Duvel-Moortgat, this beer is exported, so you will find it outside of Belgium as well.

Liefmans Kriek Brut
The basis for Liefmans Kriek Brut was laid in the years 1900 to 1930, when local farmers started popping in to Liefmans, to ask for a barrel of beer to use with their glut of 'krieken' (cherries). But it was Pierre Van Geluwe-De ...

Liefmans Goudenband
The original name of this beer was IJzerenband (Iron Band). It used to be categorised as a 'provisie-bier' – a beer for storage – as it was slightly heavier in density and alcohol than the Oud Bruin, and matured longer 'in-bottle ...
Facebook
Twitter
Google
Email
Pinterest
GET LATEST BEER NEWS