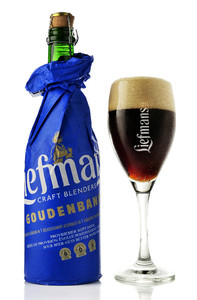 The original name of this beer was IJzerenband (Iron Band). It used to be categorised as a 'provisie-bier' – a beer for storage – as it was slightly heavier in density and alcohol than the Oud Bruin, and matured longer 'in-bottle' at the brewery. People would purchase it to lay down in their cellars, and then bring it out on special occasions.

The current Liefmans Goudenband (Gold Band) is even stronger – and somewhat more complex. It is far from easy to produce a sour beer with as high an alcohol content as this one. That's because the high alcohol percentage slows down the bacteria.

But it's worth the wait. As the beer spends longer maturing, it gains a beautifully balanced fruitiness. The legendary Rosa Merckx says of it that “the Liefmans Goudenband is a great example of a beer that matures well in the tank, thanks to its acidity and a low pH”.

So Liefmans Goudenband is a beer to stimulate the senses on all levels. With its deep brown colour, it looks beautiful in the glass. Taste it and you will be enveloped in a wealth of tastes and aromas.

Thanks to its mixed fermentation, the beer has a complex aroma, almost reminiscent of wood. All of which contributes to making this beer a shining example of tradition and craftsmanship.

This means that spontaneous fermentation occurs first, in common with the production process of gueuze-lambiek.

A dark brown and clear beer. If chilled and poured correctly this beer will develop a beautiful collar (ideal thickness: two fingers).

The elegant stemmed Liefmans glass is very suitable for tasting this beer. It is the same glass used for the Cuvée and the Oud Bruin. The only Liefmans served in a different glass is the Fruitesse.

The beer is particularly herbal, with a dry and slightly caramelised malty taste, enriched with fruity touches reminiscent of nuts or dried raisins. Mildly sour and slightly sweet.

The star element of the taste is in fact this perfect balance between sweet and sour. The finish of the Liefmans Goudenband has a complex, fully aromatic aftertaste, one that makes you want to enjoy more of it (to say the least).

If stored correctly, this beer will continue to mature in the bottle for ten years. Remember to store the bottles vertically in a dry, cool and dark place.

Like the Liefmans Cuvée, this is a beer that will undergo a further positive taste evolution.

Liefmans Goudenband is available in 37.5cl and 75cl bottles, packaged in the characteristic paper wrapper.

In common with the Cuvée Brut, this beer is slightly harder to find than the Liefmans Fruitesse.

Nevertheless you will still be able to get hold of it pretty easily, through specialised beer shops and cafés, both in Belgium and abroad.

Liefmans Fruitesse
The youngest member of the Liefmans family was introduced some years ago, in the summer of 2009, as an ideal summery aperitif beer – one that could be served on ice. “Fruitesse on the Rocks!” is its tag-line. Fruitesse doesn't pr ...

Liefmans Kriek Brut
The basis for Liefmans Kriek Brut was laid in the years 1900 to 1930, when local farmers started popping in to Liefmans, to ask for a barrel of beer to use with their glut of 'krieken' (cherries). But it was Pierre Van Geluwe-De ...
Facebook
Twitter
Google
Email
Pinterest
GET LATEST BEER NEWS