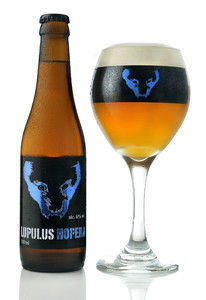 Lupulus Hopera is a golden-blonde Belgian pale ale, dry-hopped and re-fermented in the bottle. The beer is both unfiltered and unpasteurised.

Although this is a strongly hopped beer, it is well-balanced in keeping with Belgian tradition.

The bitterness is beautifully restrained, thanks in part to the use of an aromatic exotic hop variety in dry hopping.

The re-fermentation in the bottle deepens the palette of tastes and aromas and lends complexity to the beer.

Lupulus Hopera is the latest addition to the Brasserie Lupulus range which already comprises Lupulus Blond (a tripel), Brune (the dark), Hibernatus (a winter beer), and the organic, Organicus.

These beers, produced with the use of the latest technology, are nevertheless rooted in Belgian tradition.

In that sense the Lupulus Hopera is classed as a Belgian Pale Ale (BPA) rather than an India Pale Ale (IPA), which can be extremely bitter or extremely aromatic.

The (I)PA style is very popular in the international craft brewers scene. It inspires Belgian brewers to create well-hopped, quite bitter or aromatic but generally balanced beers.

Lupulus Hopera is brewed with pale malt, Herkules, Simcoe and Ella hops; with the Ella hops used for dry hopping, yeast, and water.

The beer takes on an orange-blonde colour covered by a cloudy head of white froth.

This beer is served in an elegant chalice on a tall stem, with its instantly recognisable drawing of a wolf cub surrounded by hop flowers.

Hopera is a mild, quaffable beer with aromas of malt, hops, flowers and hay.

The hop bitterness is beautifully tamed in this dry beer with its subtle hints of fruit and herbs and spices. The finish is dry-bitter.

Lupulus Hopera makes a delicious pairing with slightly smoked salmon in a dill sauce, mild curries, a salad with crayfish, and fish and chips.

We would not really suggest to start using this one in sauces as the bitterness of the hops will intensify during the cooking process, unless of course you are looking to add that bitter tang as an aroma.

Lupulus Hopera keeps in the bottle for two years. Store the bottles in a vertical position in a cool and dark environment.

A yeast sediment will form at the bottom of the bottle after standing for a while as the beer is unfiltered. This yeast can always be added when serving your beer according to your own personal taste.

As with the Lupulus Blond this beer is brewed to be enjoyed fresh; keeping it longer than advised will diminish the hoppy character and fruity aromas.

The Lupulus Hopera is one of the lastest beers to be added to the Lupulus range; nevertheless it quickly has found its way around Belgium.

You will have no problem picking it up from local shops or ordering it at the more specialised beer cafés.

Brasserie Lupulus also exports their beers across Europe and the rest of the world, so no need to panic, even outside of Belgium you will be able to get hold of it.

Lupulus Blond
Lupulus Blond is an unfiltered, unpasteurised "Ardennes Triple" that ferments in the bottle and in the barrel. Pierre Gobron, the brewer at Brasserie Lupulus, sets a high benchmark for himself. Lupulus Blond comes in a champagne- ...