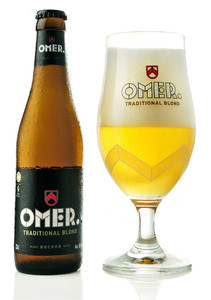 OMER. Traditional Blond has a particularly interesting history, wrapped up as it is with the history of the family behind the brewery. It was in 1892 that Omer Vander Ghinste started up this brewery in Bellegem. To advertise his beers, he had the wording ‘Bieren Omer Vander Ghinste’ added to the leaded-glass windows of his café’s facade.

The woman behind the brewer, Marguerite Vandamme, pointed out to him that it wouldn't be feasible to replace those precious windows, every time a new generation took on the brewery. So from that point on, each first-born son was baptised ‘Omer’. Those self-same handcrafted windows are still a prominent street-feature in Bellegem, the home-village of the brewery (just outside Kortrijk).

So this lovely high-fermentation blond beer is the fruit of 120 years of craftsmanship from the Vander Ghinste family, with its long line of Omer's. After boiling, the wort is cooled down to the desired temperature and then injected with the beer's specific yeast.

The fermentation process takes four to five days, at a temperature of around 20°C. After this main fermentation, the beer will be stored for three further weeks, at 0°C. During this period the beer will mature, and the yeast will descend.

After the storage period it is then filtered. Fresh yeast and sugar are added, once again, so that after bottling, re-fermentation occurs in the bottle. This second fermentation takes 14 days, in warm rooms held at 25°C. The sugars are converted into more alcohol and carbon dioxide, adding strength and life to the beer. The beer will then rest for a final three weeks.

OMER. Traditional Blond is brewed with pure water, yeast, summer barley malts from the Loire region (France), and three varieties of hops originating from Germany, Slovenia and the Czech Republic.

Like most other Belgian beers, OMER. Traditional Blond has had a glass specially designed for it. It is offered for sale by Brouwerij Omer Vander Ghinste and specialised beer shops.

OMER. Traditional Blond is a high-fermentation beer that tastes full in the mouth. Your nose will pick up fruity aromas thanks to the yeast. That fruity character is also evident in the taste, when the hop comes to the fore as well, with finely bitter touches culminating in a slightly bitter finish.

OMER. Traditional Blond forms an excellent pairing with a typically Belgian recipe: sole meunière. This is a fried Dover sole served up with fries and a fresh salad. Another fine culinary highlight is 'mussels prepared with Omer'.

This beer has to be drunk as fresh as possible. That said, OMER. Traditional Blond can be stored for up to a year in a cool and dry place with a constant temperature. The bottles are best stored vertically.

OMER. Traditional Blond is available in 33cl and 75cl bottles. The larger bottles, because of the way they are presented (with wire and cork), make an ideal alternative for cava, champagne or other vins moussants.

This beer is available all the year around.

As OMER is the brewery’s flagship beer, you will find it in upmarket cafés, supermarkets and beer outlets in Belgium and worldwide.