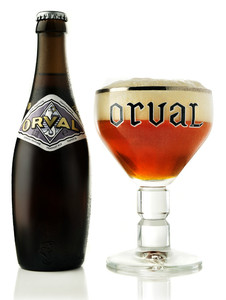 Orval is a real stand out. The recipe, the glass, the bottle and the label – all are unique, and all have remained unchanged since Orval’s launch in the 1930s. This beer is also a stand-out thanks to its combination of brewing techniques: top as well as spontaneous fermentation. And both the hops and the yeast make equal contributions to this beer’s unequaled aroma and taste.

In contrast to the other Belgian Trappists, Orval has limited itself to producing this one single beer. That decision is wrapped up in the unique approached taken by Orval's Trappist community, right from the beginning. The monks of Orval specifically started up their brewery so that they could finance the reconstruction of their abbey.

Profits made from the beer were re-distributed, with over half going to charitable causes, the rest to the abbey's construction. The beer certainly proved its worth – within fifteen years a complete abbey rose from the ashes.

Which all goes to confirm that Orval, the beer, is nothing less than a phenomenon. Even today, with the explosion of styles and quality among Belgium's beers, Orval is a rare pearl – successfully uniting hops, yeast, barley malt, crystallised sugar, and a touch of wild yeast magic, to produce that warm Orval glow.

Ardennes locals tend to have a preference for their Orval to be aged at least six months, the ‘vieil Orval’ as they call it. In such aged-brews, the wild yeasts will have completed their tasks, hence the reason for this preference: the beer will be less dry, milder, more complex. But aged Orval is also good news for diabetics.

That's because, given enough time, the wild yeasts consume all the remaining sugars in the bottle, so the beer is left without a trace of the sweet stuff. Leaving plenty of space for Orval's complex taste profile to reveal itself fully to your palate.

Orval is a misty beer, giving off the warm orange glow of the setting sun in spring or autumn, topped off by a luxuriant mousse of cream-coloured froth.

This beer is served in the typical Orval chalice, with its distinctive triangular appearance, silver rim and blue “Orval” imprint.

Orval has a complex taste profile, one that hits many notes, all of which join to form a pleasing chord. A slightly malty palate that also offers fruitiness – in fact an entire fruit basket – covered by a prominent veil of earthy, herbal, peppery bitterness. That, together with its sweetly-sour hints of citrus, forms a perfect complement to the beer’s pleasantly sour and wild character. Full in the mouth, and creamy, with a playful fizz of CO2. Dry aftertaste.

Orval makes a great pairing with walnuts or a walnut cheese, with quail larded with Ardennes or Iberico ham, or with breadsticks wrapped in either one of these hams. Those of a sweet disposition will appreciate the Orval 'sabayon', with its citrus zest garnished with caramelised pineapple.

Best stored in a cool and dark room. The label states both the production date and the best before date, so you will know how young or old the beer is. The wild fermentation makes Orval undergo an exceptional taste evolution.

In time, the beer will lose its hoppy character, with the fruitiness coming to the fore. The sour aspect of the Brettanomyces yeast ensures that this beer only rarely becomes unbalanced.

This beer is quite a bit rarer than those of other Trappists – Chimay or Westmalle, for example. The brewery is at full capacity, and there are no plans to expand. The volume will not be increased in the short term, quite the contrary in fact.

So inevitably, some traders will limit the number of crates per customer, just as they do for the Rochefort 6. The beer can also be purchased from the shop at the visitors’ centre but, unlike the arrangement with Westvleteren's beers, you cannot order in advance.

The unmistakable skittle-shaped Orval bottle, available in a 33cl format only, is the sort of bottle that can be recognised blindfolded, thanks to its bulbous ‘big belly’. This characteristic bottle, and beer glass, were designed by the abbey’s architect, Henri Vaes, a man who had much to do with Orval's stand-out stylings.