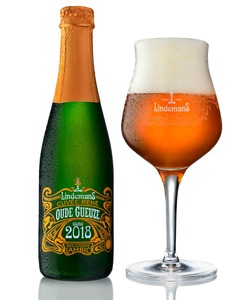 ‘Pajottenland champagne’. That is the name given by lambic brewers to these spontaneously fermented – no yeast is added – lambic beers that are not dissimilar to wine.

It is no coincidence that lambic brewers use champagne bottles for their Oude Gueuze. They collect the empty bottles from major restaurants and other venues where champagne flows freely. This immediately lends a festive character to this unique Belgian beer style.

Thanks to its in-bottle re-fermentation, the Lindemans Oude Gueuze Cuvée René gives you a completely natural sparkle and froth.

This Oude Gueuze contains one-third old lambic, aged for at least two years, and two-thirds young lambic, which is at least one year old and has been matured in large oak foeders.

The yeasts and sugars in the young lambic prompt the in-bottle re-fermentation. Slowly but surely the wild yeasts will convert all of the residual sugars into alcohol and carbon dioxide. Six months on, the result is a golden-coloured, sparkling, mildly sour gueuze.

This beer can be stored for a number of years in a cool, dark place where its taste will continue to evolve.

Lindemans Oude Gueuze Cuvée René was elected the “World's Best Gueuze” at the 2013 World Beer Awards. Lindemans is one of only eight breweries that, to this day, brew an authentic lambic beer in the Valley of the Zenne near Brussels.

Besides the Oude Gueuze, the brewery produces a Gueuze, Faro, Kriek and Oude Kriek. The other fruit beers include the Lindemans Pecheresse (peach), Framboise (raspberry), Cassis and Apple.

Spontaneously fermented beer that re-ferments in the bottle.

This clear beer, with its golden colour, gives off fine bubbles below its delicate collar of froth.

Lindemans Cuvée René should be poured into an elegant, high-stemmed wine glass that ensures beautifully preserved aromas and a long-lasting froth. Pour the beer carefully; there is yeast at the bottom of the bottle. The beer can be consumed with or without the yeast, depending on each person's individual taste.

Complex tart and well-balanced taste with a nice crisp, dry and tart finish

This is a 'keeper', the bottle can be stored for several years if done so in a dark, cool room.

Due to the second fermentation process in the bottle, its shelf life is the same as that of a good bottle of wine. Bottles can be stored lying on their sides.

After transportation, a 3-day rest period will allow the yeast to settle to the bottom of the bottle. This makes it possible to serve the beer without it becoming cloudy.

Oude Gueuze Cuvée René is only available in the typical 37,5cl and 75cl bottles, the beer can be easily found in Belgium via specialised beer shops and café's focussing on speciality beers.

The beer is also widely exported across Europe, Asia and the US.

Lindemans Framboise
Europeans have been drinking fruit beer for centuries. The Celts were partial to apple beer. The Belgians mastered the brewing of fruit beers a long time ago. This tradition goes back hundreds of years. Fruit lambic is the best k ...
Facebook
Twitter
Google
Email
Pinterest
GET LATEST BEER NEWS