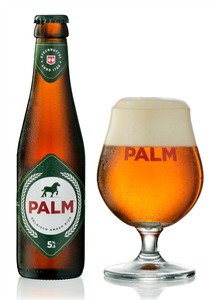 The Palm Brewery was founded in 1929. Their amber beer is a ‘Spéciale Belge Ale’. This beer style was created early in the 20th century by Belgian brewers, to provide an alternative to the increasingly popular pils. This top-fermented beer, firmly anchored in the Belgian brewing tradition, was formulated as a response to the new bottom-fermented beers, the majority of which were imported. Its alcohol content (5.2% abv) is similar to that of pils. Ever since its inception this amber beer, featuring the iconic Brabant draught horse, has become a firm feature in the Belgian beer landscape.

Palm is a light, amber-coloured, eminently quaffable ale. The beer owes its colour, its hints of caramel and honey-like tenderness to the amber malts that caramelise naturally during the brewing process. Delicate aroma hops from Kent do their bit to produce a mild and balanced beer. The proprietary Palm yeast contributes fruity touches. You can smell banana in particular. Palm has expanded its range throughout the years with its alcohol-free Palm 0.0, Palm Royale (7.5% abv) and the light Palm Session IPA (3.5% abv). In line with annual tradition, to celebrate the end-of-year festivities, the slightly stronger Dobbel Palm is produced as a limited edition. Brouwerij Palm is a member of Royal Swinkels Family Brewers together with the De Hoorn Microbrewery and Rodenbach.

In the glass Palm takes on a copper colour covered by a creamy collar.

The hop aromas come to the fore in the branded chalice glass, tapering towards the top and resting on a tall stem. This amber beer is also often served in a robust pils glass. Either way, whichever glass you choose the creamy collar stands up well.

The carefully selected speciality malts provide a honey-infused tenderness and Palm’s own, carefully cultivated, yeast accounts for the fruity aromas. Delicate aroma hops from Kent blend it all together into a subtle harmony.

A great pairing with classic Belgian cuisine, steak-frites for example. Also goes well with pork chops braised in Palm accompanied by slightly caramelised endives, or it can be paired with any other type of grilled meat. On the cheese front we can recommend a mild Gouda from the province of Noord-Holland.

Bottles can be stored for 24 months. The beer will keep for 6 months in kegs.

Cornet
Microbrewery De Hoorn was re-established in 2014. With the launch of its Cornet, Brouwerij Palm is harking back to the tradition of oaked beers, where oak is used to create the taste. The four ‘Ingredients Masters’ employed by th ...
Facebook
Twitter
Google
Email
Pinterest
GET LATEST BEER NEWS