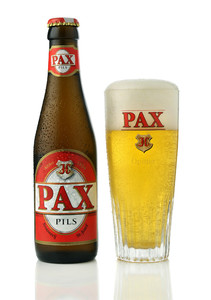 Pax Pils is a traditional pils that is popular in its local area. This beer was introduced in 1937, just a few years after the inauguration of the new Cornelissen brewhall.

A bottom-fermented beer such as this ferments at low temperatures (6 to 12°C).

Towards the end of the fermentation process, the yeast descends to form a sediment at the bottom of the bottle.

Pils was not instantly popular in Belgium and it took several dozen years for it to catch on, particularly in the café trade. Quite a few self-respecting village breweries started to focus on pils, making deliveries to many a regional café.

Pax Pils is brewed with soft water drawn up from the well that has proved ideal for the production of this type of beer. This refreshing, slightly bitter pils is a veritable session beer, one of those that go down very easily.

Pax Pils contains plenty of malt which provides more character than your average pils. It also tastes more full in the mouth.

From a thirst-quencher such as this you would expect a sufficient degree of bitterness thanks to the use of hops and malt, and it does not disappoint.

At any rate, a pils beer such as this is best consumed as fresh as possible. It has an amazing purity. A brief but enjoyable finish before your taste buds are ready for the next gulp.

In the glass, this beer takes on a pale blonde colour underneath a sturdy, two fingers thick, white collar of froth.

A café that serves a proper pils stands out by the way they treat their glasses: clean and washed by hand. Essential for the best pils experience.

Pax Pils is served in a classic, robust pils glass. The glass has ridges at the bottom to ensure that you are not touching the glass directly to warm the beer with your hands.

Pax Pils makes a delicious pairing with steak, tomatoes filled with prawns, omelette, salads, and mussels; all with a side order of fries, of course.

In other words, this pils goes very well with all of the classic Belgian dishes mentioned above.

12 months for bottles and 6 months on tap.

Pils is a beer style that has to be drunk young and fresh. This pils beer only leaves the brewery when it is ready to drink and enjoy.

Honesty commands us to tell you that this pils may be hard to track down, although it is more widely available in the Province of Limburg.

For pils lovers It is worth the effort of finding it.