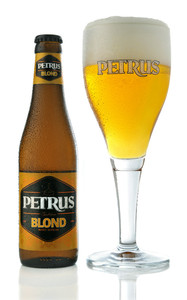 The Petrus family from Brouwerij De Brabandere unveils a world of aromas and flavours. Petrus Blond is a classic from a Petrus Tradition range that also includes the Dubbel and Tripel.

The hop cones adorning the gold-coloured label tell the story of the beer inside.

Three different aroma hop varieties contribute to the taste of this thirst-quencher and provide a pleasantly refreshing finish.

This moderately light blonde fits any occasion, making a great aperitif while also being suitable as a thirst-quencher or alongside a wide range of dishes.

Mild, fresh and fruity is the best way to describe Petrus Blond.

Alongside the Petrus Tradition range there are the well-known Petrus ‘sour beers’. Petrus Roodbruin, Aged Red and Aged Pale are pure foeder beers or blends of foeder beers.

Their maturation in big oak foeders (casks) plays a big role in determining their aroma and taste.

Other successful beers from Brouwerij De Brabandere are the Bavik Super Pils, invariably found in cafés in the Kortrijk area, and the blonde Kwaremont (named after a famous cycle race climb) that scores highly with riders, bike tourists and cycling fans.

Petrus Blond is a top-fermented beer.

In the glass, this beer takes on a coppery-blond colour underneath a delicate head of froth.

The Petrus beers are served in an elegant, long-stemmed, tulip-shaped glass bearing the Petrus logo that does full justice to the beers’ aromas.

This is a mildly sweet thirst-quencher with a refreshingly bitter aftertaste. There are striking aromas of caramel from the malt.

Citrus flavours come from the hops. The finish is short and dry.

There are very few dishes that don’t go with this versatile beer, which is recommended with salads, steak and fries, as well as hard cheeses.

Explore with different tastes and aromas to find your own favourite pairing with this beer.

The bottled beer can be stored for 24 months. In the barrel, it will keep for 6 months.

Petrus Blond should be stored in a dark and cool environment. Prolonged ageing of this beer will not improve the taste.

As with the other Petrus Tradition beers you will be able to find this one fairly easy in Belgium as well as abroad. Brouwerij De Brabandere exports their beers around the globe.