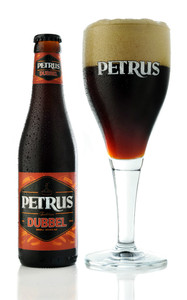 The strong brown dubbel, a beer style that originated in abbey breweries, has evolved into a generic term. Call ‘Dubbel!’ across a café counter and, without exception, you will be served a quite strong, brown beer in which the malt flavours quickly gain the upper hand.

The Petrus Dubbel fits this description to a tee. It is a member of the Petrus Tradition family that is completed by the Blond and Tripel.

This full-malted beer is brewed with six different speciality malts. The roasted malts account for the dark brown colour and determine the aroma and the taste of this dubbel.

Some of these beers have been cut or blended and all of them have matured in big oak casks called foeders.

Brouwerij De Brabandere is also known for its Bavik Super Pils and the Kwaremont ‘course beer,’ named after a famous cycling climb and that enjoys great popularity with fans of that sport.

Petrus Dubbel is brewed with water, a house yeast, six speciality malts including roasted and toasted malts, and hops.

This brown beer shows up clear in the glass below a creamy head of froth.

The Petrus beers are served in an elegant, tulip-shaped branded glass on a tall stem that does full justice to the beer’s aromas.

This beer contains six different speciality malts that give it a fully malted and perfectly balanced taste.

The bitterness from the malt is largely responsible for its aroma and taste.

This quite strong brown beer makes a perfect pairing with, and in the preparation of, a pork stew like the Belgian varkenskarbonade, rabbit with prunes, and game dishes.

It is also delicious in combination with dark chocolate, abbey cheeses and goat’s cheeses.

The bottled beer can be stored for up to 24 months. Kegs will keep for 6 months.

Store in a dark and cool environment. As with the other beers in the Petrus Tradition range this beer leaves the brewery in its prime so drink it young.

Brouwerij De Brabandere has been brewing for generations and like many Belgian breweries have established successful distribution and export channels ensuring this beer can be enjoyed far and wide.