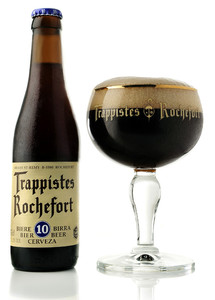 In 1952, in order to place the modernisation of the brewery on the right commercial footing, much care was taken with the launch of Rochefort's two new beers. The refectory beer, had been the basis for the development of the ‘Middel’ (also known as ‘Merveille’) which became the Rochefort 6. The 10, however, needed something else, to elevate it: candy sugar, steeped in the wort in metal baskets, quite an innovation in those days.

Furthermore, two malts were used in the brewing process: pils and caramel malt, as well as wheat starch, two varieties of hops and Rochefort’s own yeast. The result was the powerful Rochefort 10, a beer sure to warm your heart with its robust dose of alcohol.

Whisky lovers will no doubt appreciate its warming glow. This red-brown beer has aromas of roast wheat, fruit (figs, cherries), nuts and dark chocolate. In the mouth you will get a prominent taste of caramel, chocolate, ripe fruits and herbal touches of hops. All of these linger until the finish. Connoisseurs compare this beer with wine, whisky and port.

Mild, rich, intense, lots of body. It is both food and drink at the same time, as wrote the late beer guru Michael Jackson. This nutritional overload is far from a coincidence. The Rochefort monks used to follow a strict diet where fish, meat and cheese were not on the menu. It took a beer like the Rochefort 10 to supplement their restricted diet.

A clear but deep-brown beer, with beautiful pearlisation under a collar of cream-coloured froth. The Rochefort 10 is doubtlessly the darkest member of the small Rochefort dynasty.

Like most Belgian beers, this one also has its own proprietary Rochefort glass. As is typical for Belgian Trappist beers, this glass is tulip-shaped. The drinking vessel can be purchased from well-assorted beer stores, or from a number of Belgian supermarkets, where it is sold in gift wrapping.

Dominant impressions of latte coffee with powerful chocolate aromas in the nose. The alcohol esters are enveloped with hints of autumn wood, citrus zest (orange, lemon) and freshly baked biscuits. The initial taste is sweetly sinful. Beer and chocolate trapped into one single glass, a liquid milky draught with a backbone of bitter malt. The alcohol warms the throat and, in the finish, you will pick up traces of cloves, citrus, orange and mocha.

For a special treat, help yourself to a slice of cheesecake made with blue cheese to share with this beer. For decadent enjoyment? A piece of pure, bitter, black chocolate. Or a Black Forest chocolate confection with red fruits. A sturdy home-made hamburger, grilled to perfection, also makes a great pairing. It could be topped off with the same (Belgian) blue veined cheese.

Best stored vertically in a dark and cool space. The brewery states that this beer can be kept for five years. Many say that it can be stored for far longer and aficionados often taste it years later, often inspired by curiosity. The beer is thought to undergo a positive taste evolution when stored correctly.

The Rochefort 10 is recognised by its blue-crown seal. This beer is only available in bottles. The Rochefort 10 is the best known, and most frequently served, of the three Rocheforts. So, compared with other Trappist beers, such as Achelse Kluis, Orval and especially Westvleteren 12, this beer is relatively easy to get hold of.

You will find it in many a specialised beer café and shop, and it is also stocked by some Belgian supermarket chains. Some of the Rochefort 10 production is even ear-marked for export.

Rochefort 8
History and provenance are readily apparent, in the taste of the 8. Ever since the 1960s, Rochefort’s own yeast culture has produced those characteristic esters in its divine brews. And even today, in 2014, Rochefort's famous Tra ...

Rochefort 6
This Trappist beer finds its origins in the pre-war bottled beer destined for the sick and infirm. But further back, 1899 was the year that first saw the monks of Saint-Remy in Rochefort light the fire under their kettles, in thei ...
Facebook
Twitter
Google
Email
Pinterest
GET LATEST BEER NEWS