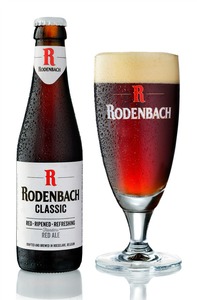 Flemish red-brown beers, Rodenbach Classic for example, were first brewed in the Middle Ages. In those days no hops were used to preserve beer. Lactic acid and acetic acid were used instead to prolong a beer’s storage period.

This gave rise to the tradition of ‘soured beers’ that are made by ‘cutting’ (blending) a quantity of young fermented beer with old, mature beer. This brewing method has remained unchanged since these early Middle Ages.

Before the introduction of the hop plant, brewers were using a herbal blend called ‘gruut’ and beer was matured in oak barrels to ensure it could be kept for longer.

This particular soured beer does not taste of gruut or hop bitter although it does contain some hop from Poperinge.

Rodenbach is considered a classic example of Flemish red-brown ale, hence the ‘Classic’ in its name.

Some of the beer will mature for 24 months in one of the 294 oak ‘foeders’ in the foeder chambers at the Roeselare brewery. Once matured, this foeder beer will be ‘cut’ with young beer to make up a blend containing 75% young beer.

Rodenbach Classic, a veritable thirst quencher, is red-brown in colour thanks to the coloured malt and derives its slightly sour taste from the maturation in oak foeders.

Michael Jackson, the late British beer connoisseur, declared Rodenbach Classic to be ‘the most refreshing beer in the world’.

The Rodenbach beer family now counts quite a few members, from the light Rodenbach FruitAge all the way to the degustation beers - Rodenbach Grand Cru, Caractère Rouge and Vintage – plus a fruit beer, Rodenbach Alexander. The Rodenbach brewery is owned by Swinkels Family Brewers, who are also the owners of Palm.

Rodenbach Classic owes its red-brown colour to the burnt caramel malts. Not only do these malts colour the beer, they also prevent oxidation.

Rodenbach Classic is served in a sturdy, ribbed glass, characteristic for this refreshingly quaffable beer that is widely liked and appreciated.

A refreshing beer that is easily digestible and stimulates the appetite. Great with pre-dinner nibbles. The mildly sour taste and complex fruitiness are reminiscent of wine.

On the Belgian coast this is a real classic, often served to accompany a tomato-shrimp combo or other seafood. We can also recommend a combination with poultry, red fruits and desserts, a crème brûlée for example.

Can be stored in the bottle for 24 months. In kegs, the beer will keep for up to 9 months.

For optimal storage keep your bottles upright in a cool, dark and dry place.

The brewing group Swinkels Family Brewers - mainly known for the pilsener Bavaria - exports their beer to almost every continent. So, whether your in Belgium or further afield you will be able to purchase some Rodenbach via the usual channels.