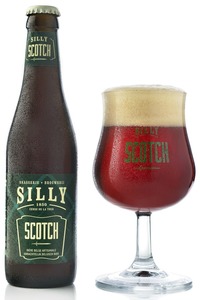 Scotch de Silly is a beer with a powerful echo of World War I, tracing its origin to the turmoil of that conflict. At that time, outside of the city of Silly, a regiment of Scottish soldiers were stationed. When they requested a Scotch Ale from the brewery, the brewers couldn't come up with the beer, because they hadn't mastered that beer style – and neither could they access the sugars necessary to brew it.

Worse, during the war, many breweries were dismantled and raw materials (hops, malts, sugar) were scarce. But adversity breeds initiative, and the unit commander managed to order some hops from Kent in England. The result was a Belgian Scotch, a truly international collaboration, born from a time of war.

Scotch de Silly was initially developed with the help of a Scottish soldier, Jack Peyne. After the war he married and settled in Silly. He continued working at the brewery for many years. That recipe created at the end of the First World War still stands to this day, and Kent Golding hops are still used.

Since 2012, there is a limited edition of barrel-aged Scotch de Silly on the market. This beer matures six months on oak. In the first year, used red Bordeaux wine barrels had the privilege, to be followed by port barrels in 2013. Who knows what the future will bring?

Dark brown colouring beer , with a dense, tightly-bubbled head. Leaves a dense and thick lacing on the glass.

Scotch de Silly stands out with sweet aromas of toffee, brown sugar, caramel and maple syrup with hints of hazel nuts. The beer develops this very sweet taste thanks to the candy sugar it is brewed with. In the background you get a hunch of nuttiness. Scotch de Silly is a syrupy sweet and thick beer with very little hop flavor. A classic Scotch ale.

This Scotch ale goes well with soups and stews. When served cold with spicy curries, the sweetness of the beer balances the spiciness. Scotch de Silly is a perfect match with raw milk and blue-veined cheeses, with charcuterie (filet américain, salami) or with a classic stew (carbonnade flamande).

The beer is also excellent with desserts such as Liege waffles, speculoos, crême brûlée or chocolate cheesecake. In food pairing, dishes such as ‘lamb with beetroot, vanilla, coffee and potato’ and ‘razor clam with tomato, ginger and a soy sauce’ will definitely do the trick. Or why not a ‘ricotta, lemon, raspberry and blackberry’ cake?