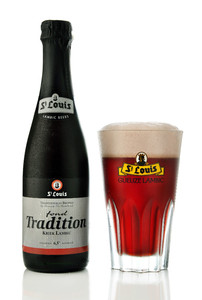 St Louis Kriek Fond Tradition is a pure, traditional, kriekenbier. This fruit beer made by Castle Brewery Van Honsebrouck with krieken cherries (sour Morello-type cherries) is truly a beer for the connoisseur.

Traditionally, the cherries were added to the beer to enhance its aroma and to promote fermentation. St Louis Kriek Fond Tradition contains a blend of young and old lambic, both of them made by spontaneous fermentation.

This is achieved by allowing the wort of the lambic beer to cool down in an open basin called a koelschip.

There, wild yeasts in the atmosphere enter the mix and promote a spontaneous fermentation. Remarkably, there is no need for the brewer to add any yeast during the brewing process.

St Louis Kriek Fond Tradition is named after Louis Lampaert, the great-uncle of the current brewery owner, Xavier Van Honsebrouck. Louis was a brewer in village of Nevele, close to the brewery’s current location.

This kriekenbier contains Oblacinska krieken-type cherries from the Czech Republic that have been steeped in lambic.

This is a spontaneously fermented beer.

This is a dark red beer with a fine lustre underneath a pinkish head of froth.

St Louis Kriek Fond Tradition is served in a traditional, robust, ridged branded glass, not dissimilar to the glass used for Bacchus.

St Louis Kriek Fond Tradition is a pure kriekenbier produced on a base of blended young and old lambic beers.

The fruity aromas of krieken cherries (Morello-type varieties) are dominant, as is the slightly sour taste that is characteristic of lambic beers.

St Louis Kriek Fond Tradition can be recommended as a companion to mature beef, duck or smoked meats.

Also, try it in combination with blue-veined cheeses such as an English Stilton or Stichelton (an unpasteurised version of Stilton).

St Louis Kriek Fond Tradition will keep in the bottle for 10 years. Store vertically in a cool and dark environment.

Kasteel Tripel
Kasteel Tripel is a West Flemish tripel through and through, enriched with Belgian hops. Brewery CEO Xavier Van Honsebrouck firmly states that this Tripel is as solid as a castle, and let’s be fair, there are few Tripels that achi ...
Facebook
Twitter
Google
Email
Pinterest
GET LATEST BEER NEWS