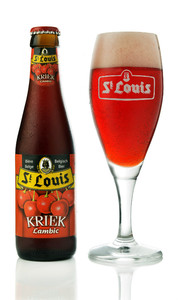 The St. Louis Kriek Lambic is a traditionally produced kriekenlambiek. It is different from the St. Louis Premium Kriek in that, instead of krieken juice, a proportion of 15% of real krieken cherries is added to gueuze lambiek. The krieken will mature along with the beer for at least six months.

Another essential difference from the St. Louis Premium fruit beers is, that after maturation, the beer is mixed with old lambiek. Sugar and sweeteners are added.

Originally this beer had an alcohol percentage of 5% but this was reduced to 4.5% and subsequently down to 4%.

This is the only remaining Castle Brewery van Honsebrouck fruit beer which is still brewn in an alternative version since the introduction of the Premium range in 2001.

Like Gueuze, Kriek has received a warrant from the European Union and can now boast to be a guaranteed traditional specialty.

Spontaneous fermentation. This Kriek Lambic is brewn on the basis of artisanally produced gueuze lambiek. This lambiek is brewn in the traditional way and will then mature in oak barrels.

The St. Louis Kriek Lambic is based on gueuze lambiek brewn with barley malt, unmalted wheat and hops. Sugar, krieken and old lambiek are then added.

This is a beer with a deep red, almost burgundian, colour, less clear than the Premium Kriek. Thanks to the added cherries, the beer yields a recognisable and distinguished pink collar.

The Kriek Lambic from St. Louis has been allocated its own glass, in the same way as the Gueuze Fond Tradition. These glasses are different from those used for the beers in St. Louis Premium range.

The beer gives an intense taste of krieken with subtle almond-like touches. This aroma comes from the cherry stones and determines the taste of this fruity delicacy.

Less sweet than the Premium kriek.

The St. Louis Kriek Lambic presents a sourer character compared to the Premium Kriek. Needless to say, this gives a different dimension to taste pairing. Up to the beer lover to start experimenting.

This beer, like many other fruit beers, is suitable to enjoy with dessert or for culinary purposes. Also good as an ingredient for sauces with, for example, fried goose liver.

Most Van Honsebrouck beers do not require further storage. St. Louis Kriek Lambic is no exception.

It is reputed that beers of this type will survive laying up over many years but we will let each individual beer lover judge for him or herself.

St. Louis Kriek Lambic is brewed in far smaller quantities than Premium Kriek. In Belgium you will find this beer in well-stocked off-licences and in specialist beer shops and cafés.

A fair amount of the production of Castle Brewery Van Honsebrouck is destined for export. So, outside of Belgium, you should be able to get hold of a bottle without too many problems.