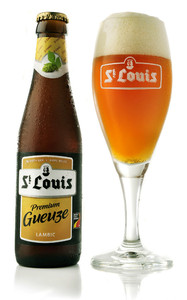 Premium Gueuze is the flagship brew of the St. Louis range and one of the jewels in the crown of Castle Brewery Van Honsebrouck. This was by no means certain when Luc Van Honsebrouck decided, a few decennia ago, to start gueuze production in West Flanders.

Memorably, de Gueuze and Kriek Saint Louis were launched in 1958 which was the year when Brussels hosted the World Exhibition. This beer originally had an alcohol percentage of 5% ABV.

It took years of pioneering, research and overcoming obstacles before, in the mid 1970's, Van Honsebrouck became the second largest producer of gueuze in the country. He was also the first brewer to offer gueuze on tap, flying in the face of all existing traditions.

At one point in time, the traditional lambiek brewers from the Pajottenland region tried to obtain geographic protection through a Royal Decree, which would have meant that only gueuze produced within a 20km radius from Brussels would be allowed to carry the name.

This Decree was never passed and nowadays, St-Louis is the only gueuze brewed in West Flanders.

To produce gueuze, you start off with a lambiek beer brewed in the artisanal way, which is then matured in oak barrels, known as foeders. This gives rise to spontaneous fermentation.

The beer is then re-fermented in the bottle. Unlike the “Fond Tradition” gueuze, the St. Louis is filtered.

The lambiek used to produce this gueuze is brewed with malted barley, unmalted wheat and plenty of (mature) hops.

St. Louis Premium Gueuze has a beautifully clear amber colour. The beer has a frothy head, appropriate for a gueuze, of about one to two centimetres.

However, the frothy collar is quick to disappear.

All four beers in the St. Louis “Premium” range are served from the same type of glass. This may be an a-typical choice of glass for a gueuze but then, this gueuze does have its own identity.

This gueuze is obtained by mixing ('versnijden'), young and old lambiek. It achieves a beautiful balance between sweet, sour and slightly bitter, which makes it an ideal thirst quencher on hot and humid summer days.

It is only mildly sour with touches of citrus, strawberry and caramelised grains.

There are plenty of opportunities for an artisanal product such as gueuze to make a good match, both in the kitchen as on the table.

The St. Louis Premium is a low threshold, very accessible gueuze thanks to its slightly sweet-and-sour character.

This geuze is not brewed to be stored. A fresh thirst quencher to drink now. Unlike, for example, the Gueuze Fond Tradition, the taste of this beer will not improve with storage.

This gueuze is available bottled and on tap. This beer makes an essential contribution to the identity and image of Castle Brewery Van Honsebrouck. It is therefore relatively easy to get hold of in supermarkets, specialised beer shops, and off-licences throughout Belgium.

As Castle Brewery Van Honsebrouck is a major exporter, this beer can also be found outside of Belgium.