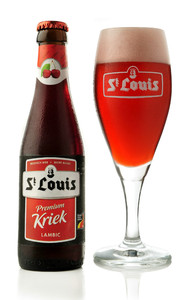 St. Louis Premium Kriek is a kriekenlambiek based on traditional gueuze lambiek with the addition of 25% krieken (cherry) juice and sugar. This is how this dark red beer is created.

Only in 2001 did the brewery introduce its St. Louis “Premium” range to supply the increased demand for sweeter fruit beers.

The specific taste of St. Louis Premium comes from the addition of the stones of Oblacinska krieken. The beer will have matured on lambiek for a minimum of six months.

Thanks to its fairly low alcohol volume and its sweeter character this beer appeals to a wide audience. It is a summery, fruity thirst quencher that is popular with the young and the old(er).

This premium Kriek was made from traditional gueuze lambiek. The lambiek is brewn in an artisanal way before maturing in oak barrels.

This process will lead to the well-known spontaneous fermentation.

Based on gueuze lambiek brewn with barley malt, unmalted wheat and a large quantity of hops. Sugar and krieken juice are then added to obtain the final Premium Kriek.

St. Louis Premium Kriek is a clear beer with a light red colour. It gives a very attractive frothy collar that is slightly pink.

In the same way as the St. Louis Premium Pêche, Gueuze and Framboise, this beer is served in an elegant, “Premium” glass with stem.

As mentioned, the St. Louis Premium Kriek is a thirst quencher through and through. You can enjoy more than one thanks to its low alcohol content.

This kriek has a summery ‘nose’ which is dominated by a sweet cherry aroma.

The taste follows on perfectly from the beer’s aroma: sweet and very fruity, with a slight touch of almonds originating from the cherry stones used in the beer’s production.

This beer will make a suitable aperitif for any summery barbecue. It also has its place in the kitchen.

This premium kriek will make a great ingredient for a number of sweet dessert recipes such as muffins, sabayon or sorbets.

In view of this beer’s characteristics (such as its low alcohol content), this brew is obviously not a suitable candidate for storage.

The brewery distributes the beer when it is ready to drink so there is no purpose in keeping it for length of time.

The St. Louis Premium Kriek is an important representative within the St. Louis range and one of the most popular beers produced by Castle Brewery Van Honsebrouck. Therefore, it has extensive distribution throughout Belgium and comes both bottled and on tap.

It should not be too difficult to locate this beer outside Belgium in the better, more specialised cafés or in (online) beer shops and off-licences.

Cuvée du Chateau
De Cuvée du Chateau is the crown jewel within the Kasteel range and has been brewed since 2010. It found its inspiration in the subterranean cellars of Ingelmunster Castle. After ten years of maturation, bottles of Kasteel Donke ...
Facebook
Twitter
Google
Email
Pinterest
GET LATEST BEER NEWS