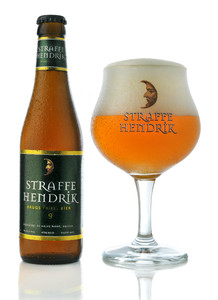 Its brewer is the oldest in Bruges, based in its historic city centre, and also well known for its Brugse Zot Blond and Donker (dark). De Halve Maan has been brewing for five centuries.

In 1981 they produced a one-off ‘straf’ - a strong beer - to celebrate the inauguration of the statue of St. Arnold, the Patron Saint of Brewers, in Bruges .

This beer is the off-spring of that celebration brew. Its name, Straffe Hendrik, refers to the taste, which is definitely ‘straf’, but also pays homage to the generations of Henri’s – Hendrik in Dutch – in the Maes family who ran the brewery.

Straffe Hendrik, which is a ‘living’ beer with a taste that develops through re-fermentation in the bottle, has inherited the tradition of the authentic Bruges tripel.

It is a blonde tripel with a powerful taste enhanced by rich touches of malt, caramel and hops.

The Straffe Hendrik family also encompasses a strong dark quadruple as well as special editions including the wood-matured Heritage, with a recipe that varies every year, and Wild (prepared with the addition of wild yeasts).

Straffe Hendrik Tripel is a top-fermented beer that re-ferments in the bottle.

Straffe Hendrik is brewed with water, a house yeast, six different varieties of malt, and Saaz and Styrian Golding hops.

The beer takes on a clear, amber-blonde colour with slight evidence of bubbles below a cloudy white head.

Straffe Hendrik is served in an elegant, tulip-shaped degustation glass on a tall stem. It does great justice to the aromas.

The initial taste is one of caramel before the hop bitterness and the malt come to the fore. The finish gives a hint of banana as well as citrus.

This degustation beer suits spicy fish recipes; or a Camembert or a semi-hard cheese like a Brugse Blomme, or else exotic fruit desserts prepared with pineapple and mango, for example.

In the bottle a Straffe Hendrik will keep for 24 months. It can be stored in kegs for up to 12 months.

As with Brugse Zot you won't be able to miss this one when visiting Bruges, you can pick up the beers from De Halve Maan literally on every street.

You can also visit the brewery and take a peek at their world famous beer pipeline...

Outside of Belgium you will have no trouble finding Straffe Hendrik as De Halve Maan successfully exports as far afield as Japan.

Straffe Hendrik Quadrupel
Straffe Hendrik heralded the era of strong degustation beers brewed by De Halve Maan in Bruges. It is the flagship beer produced by the oldest brewery in Bruges’ inner city, known for its Brugse Zot Blond and Donker (Dark). Straf ...